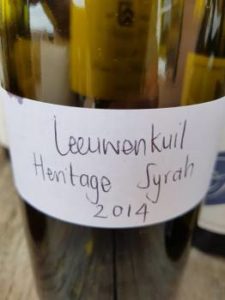 When the lion roars…

Today saw a comparative tasting of Hunter Valley and South African Shiraz, 12 top examples of each, held in Fresnaye, Cape Town. Out of the 24 wines tasted, South Africa took the top five places, with a further two in the top 10.

The event was undertaken partly as an exercise in self-education, partly as “a pistols-at-dawn showdown”, with Grant Dodd, the Australian CEO of Haskell Vineyards, sourcing the Hunter Valley wines and the local wines selected by me.

The panel consisted of me, Dodd, Platter’s taster Hennie Coetzee, well-known local commentator Tim James and James Pietersen of Wine Cellar. The tasting was conducted blind with scoring according to the 100-point scale.

The Hunter Valley line-up was as follows:

By way of context, Dodd supplied the following information regarding the Hunter Valley: “It is Australia’s oldest, and most visited wine growing region, primarily by virtue of its proximity to Sydney, the first place of settlement in Australia.

It may also be Australia’s most maligned. The Hunter Valley has an unfortunate habit of receiving the bulk of its yearly rainfall right in the middle of harvest, creating a variability in the regions wines that affects its reputation. At the same time, the Hunter has the distinction of producing many of Australia’s greatest, and most long lived wines, going all the way back to the legendary Mt Pleasant wines made by Maurice O’Shea in the 1940s and 50s. These wines are still regarded as benchmarks by the Australian wine community, and fetch upwards of R50 000 a bottle on the secondary market.

Back in the day, these wines were largely marketed under the banner of “Hunter River Burgundy”, reflecting the savoury, medium bodied style in which many of the wines were made. Recent years have seen many leading ( and new) producers pay homage to that era in reverting to a style that is closer to medium bodied, and which expresses the terroir of the best sites in the region. Despite vintage variability, in years where the weather gods smile on the Hunter Valley, truly great wines are produced. Such a year was 2014, a vintage that is described by some winemakers as the best since 1965.”

The SA line-up was as follows:

My top wines were:

The average score was 92 and there was very little in qualitative terms to separate any of the wines. Was it easy to discern country of origin? Pietersen correctly identified this in 16 out of the 24 wines his thesis being that the Hunter Valley wines were marked by red rather than black fruit and particularly tangy acidity than what he was used to on local wines. Coetzee, on the other hand, said that many of the wines that turned out to be South African were marked by a “stemmy” character.

To my mind, however, decisions concerning picking date seemed to over-ride matters of terroir, some very pretty wines from grapes harvested early in evidence from both countries. As Dodd remarked, phenolic under-ripeness is punished with other varieties but has come to be appreciated when it comes to Shiraz.

Leeuwenkuil, Willie and Emma Dreyer’s Swartland farm, has some 1 250ha under vineyard including the block that produces the much-lauded Heritage Syrah, the current-release 2017 right up there. The nose is...

The Reserve Red 2017 from Leeuwenkuil is uncomplicated yet tasty and isn’t that what you want from a blend with an approximate retail price of R120 a bottle? Shiraz driven...