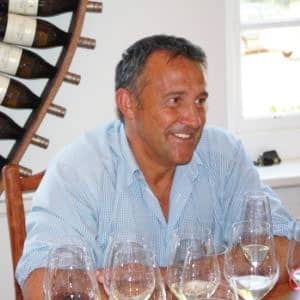 From the February issue of Business Day WANTED: André Rousseau, 48, started as viticulturist at Constantia Uitsig in 1997 and became involved in the actual winemaking from 2003.

You started at Constantia Uitsig in 1997. What do you know now that you wish you’d known then?

The key to wine quality wine lies in the grapes. All the other steps that follow in the winemaking process are important but secondary. As a youngster, I was preoccupied with technique and only later realized that for the best wines you need the best fruit.

Constantia Uitsig makes great Sauvignon Blanc, Semillon as well as a blend of the two.  What defines the two varieties as grown on your property and why do they work so well together?

Our Semillon gives us citrus, lanolin as well as herbaceous characteristics while our Sauvignon Blanc gives us ripe fruit characteristics – passion fruit and gooseberries – but also minerality.

Our first Bordeaux blend was produced in 2002, consisted of 80% Semillon & 20% SB – today we work around 65 to 70% Semillon, depending on the vintage. Semillon will always be the majority because it has the ability to age better and provide better complexity and structure.

The property was recently acquired by Pepkor chief executive Pieter Erasmus. What plans for the future?

The new owners are planting more vineyards – we’re down to 20ha from 32ha at the moment – and the emphasis is very much on being environmental friendly. There are also plants to build a new cellar and tasting venue. The old River Café, which closed its doors last year, is also going to be renovated and reopened under new management soon.

Constantia is known for its excellent white wines but increasingly there are some very good reds to the fore. Why do you think this is?

The climate in the valley allows for particularly slow ripening in the South African context which means our reds have colour, texture, structure and complexity.

Favourite international wine region and why?

Tuscany is my all-time favourite wine region. I remember an occasion back in 2006 when I was privileged to have dinner with the late Frank Swanston, then chef of Constantia Uitsig restaurant. A bottle of Ornellaia 2003 was opened accompanied by sirloin steak, and I’ve been hooked ever since.

What has been your most memorable wine experience?

Being involved in the production of our 2002 Semillon Reserve, which won John Loubser of Steenberg the Diners Club Winemaker of the Year Award in 2003 was a highlight as was the production of my first Cap Classique from the 2005 vintage.

You recently got into photography. What’s the appeal?

My hobby is photography. Favourite subjects? The vineyards but also nature as a whole. I can spend hours in the forest, on the mountains or at the beach. I also shooting my sons playing sport.