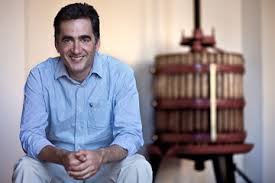 Born in the USA, José Conde moved to South Africa from Tokyo in 1997 because his wife Marie wanted to live closer to her parents who had bought Jonkershoek property Oude Nektar. He freely admits to having no winemaking qualifications (he holds a bachelor’s degree in fine arts and originally worked as a graphic designer) but couldn’t resist trying his hand achieving immediate success, his maiden ’98 Cab under the Stark-Condé label rating 5 Stars in Platter’s.

Conde, now 52, has tended to work primarily with Cabernet Sauvignon and Syrah from his own vineyards but recently expanded his repertoire to include other varieties including Pinot Noir. “A few years ago when we opened a café on the property and I started making a bit of Pinot as a complement to some of the food. I will be the first to admit that a full-bodied Cabernet may not be the best accompaniment to a light salad, especially on a warm summer’s day,” he says.

You started out life as a graphic designer. How does that impact on your approach to winemaking?
That was so long ago, it’s a bit difficult to remember. It is hard to believe it now but when I studied we didn’t have computers. We studied drawing. I have always had an interest in craft and I have always enjoyed the physical act of creating something. Wine is not so different.

Tell us about The Grail Pinot Noir 2013.
A Cape Town developer named David Kretzmar – who, in fact, doesn’t even drink wine – decided to plant a 4-hectare Pinot Noir vineyard in a remote spot in the Overberg and cultivate it organically. That’s a bit crazy. We happened to both use the viticulture consultant Kevin Watt and when Kevin told me about it I went out to look and couldn’t help but get excited at the potential of the site.

All of our winemaking is fairly traditional. We truck the grapes in small lug boxes to our cellar in Stellenbosch and crush the grapes into small open fermenters. The ferments are all done with hand punchdowns. About 10% is done whole-bunch, which adds some interesting perfume notes and tannin. After fermentation the wine was basket pressed to small French oak for 11 months maturation.

Does Pinot Noir deserve its reputation as the “heartbreak grape”?
Pinot Noir typically produces very small, tight bunches and the grapes are relatively thin-skinned for a red variety. They can be fairly susceptible to rot, especially in our cooler areas where most is grown. The wine is fairly temperamental – you taste a barrel one week and it is absolutely gorgeous and two weeks later you try the same barrel again and it is all funky or closed. All wine in barrel can be like that, but Pinot Noir seems to be particular in its extremes. Fortunately, I tend to be a “let nature take its course” winemaker and I don’t get too fussed about such matters. One thing I have learned over the years is that if you start with good grapes and stick to the fundamentals, the wine usually works out in the end.

South Africa has tended towards what I would describe as a fairly masculine, big-oaked style of Pinot. Since I already make full-bodied Cabernets, from the beginning I have used a lighter touch of oak on my Pinots and tried to make them more feminine in style – with all the positives that word brings to mind.

Many of the local Pinot benchmarks sell for significantly more than R200 a bottle. Is the quality there?
Pinot sometimes trades on its scarcity. I think there is room for different styles and different price points. I certainly understand the ego of wanting to create a “benchmark”. But here I have intentionally tried to make a well-priced Pinot [about R100 a bottle} that will give a lot of pleasure – everyday pleasure. That is the Holy Grail, right? Hence, the name of this wine.

What has been your most memorable wine experience?
Just after we got engaged, my now wife and I took a short trip to Rome. After a fun, long day exploring the back streets we got stuck in a deluge of rain and decided to pop in to a small quaint trattoria. The food was amazing. The simple soup they served still sticks out in my mind for its deliciousness. However, the wine they recommended was absolute rubbish. Even after 26 years, its vileness sticks in my mind. When I make wine I always keep this in the back of my head – my responsibility for creating deliciousness.

You enjoy reading. Best work of fiction in the last 12 months?
Americanah by Chimamanda Ngozi Adichie. I have read all her books. I enjoy the simple artlessness of her writing. It sucks you in.

And non-fiction?
Thinking, Fast and Slow by Daniel Kahneman. The part about inconsistency in wine judging should be required reading in our industry.

All-time favourite authors?
I tend to read like I drink: all over the place and rarely the same thing twice.

Hunting mushrooms is a favourite pastime and the Jonkershoek forest is famed as a source of them. How hard are they to find these days?
You tend to find mushrooms consistently in the same spots, but year-on-year it depends a lot on the precise weather conditions. It is amazing how you can visit the same spot over several days and suddenly find a very large mushroom in a spot you know you checked the day before. For me, though, it is all about the hunt: the time in the woods, alone, in contemplation. It’s magical.

Picking the wrong mushroom can have unfortunate consequences. Tips for beginners?
Go with someone who knows what they are doing! But I will admit to only hunting for Porcini. In our parts it’s the most elusive. But when you know it, it’s absolutely un-mistakable.

Favourite recipe featuring porcini?
I prefer it as simple as possible: sautéed in olive oil with a bit of garlic served over some fresh pasta. Of course a glass of The Grail Pinot Noir would be a perfect match!