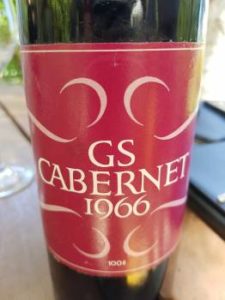 South African Cabernet Sauvignon urgently needs some custodianship. Many think of it as a mainstay of the industry with wines like GS 1966 and 1968, Nederburg 1974 and Rustenberg 1982 the stuff of legend while wines from this variety under the Zonnebloem label from the 1960s and 1970s impress more often than not when opened now.

Do a little research, however, and it appears Cab’s standing in the industry is relatively tenuous. Prior to the Wine of Origin legislation of 1973, controls over varietal naming were loose meaning that Cab was often blended with a melange of other grapes even though it was presented to the market as Cab and Cab alone.

Wine of Origin had the effect of focusing attention in South Africa on the potential of the individual property or “estates” (as opposed to  multi-regional, branded wine which had dominated until then) and with this, the workhorse variety that was Cinsaut was downplayed in favour of more premium varieties like Cab. However, it would be wrong to think that massive plantings of Cab now ensued – in 1990, the variety still constituted less than 4% of the national vineyard.

It was only after political transformation, and the changes to the industry that this facilitated, that Cab really took off with it making up 13.4% of the national vineyard by 2005.

Today, it remains South Africa’s third most widely planted variety but it is well past its peak, total area having dropped by 17.5% from 2005 to 2015, 11 170ha in the ground at the end of that period. Stellenbosch continues to be the foremost Cabernet wine growing area with 28.4% of overall.

In light of the above, SA Cab might be considered a fairly recent phenomenon and yet it can’t be denied that it continues to captures the imagination of many. Are producers, especially Stellenbosch producers doing enough to leverage this? Similarly, can producers who specialise in the variety match their counterparts working with other varieties for innovation and general excitement?

Emile Joubert, wine industry public relations consultant , recently organised an informal tasting aimed at reminding all those in attendance of Cab’s virtues, the line-up as follows:

The Longavi, which sees local winemaker David Nieuwoud involved in the winemaking, was very sleek; the Caymus, a wine which sells for around $200 a bottle according to wine-searcher.com, showed so much oak as to be undrinkable, at least for me.

The Rust en Vrede and the Simonsig, both with alcohols of 15%, were perplexing in how powerful they were – they seemed designed to appeal to Caymus fans without being entirely able to shake their Stellenbosch origins.

The Calon Segur 2008 had all the restraint and complexity you’d expect from Classed Growth Bordeaux while the Wateford wasn’t far off the pace, it’s relatively moderate alcohol of 14% serving it well although the wine was definitely not squeaky clean.

The Kanonkop 2011 was magnificent – plenty of fruit concentration but not at the expense of detail while the Smith Haut Lafite showed intolerable levels of spoilage yeast Brettanomyces.

The Delheim was true not just to Stellenbosch but to the cellar itself – old school in the best sense. The maiden vintage Boekenhoutskloof Stellenbosch meanwhile was luxuriously styled – rich and broad with smooth tannins. Trust cellarmaster Marc Kent not to let a business opportunity to go begging.

Finally, the iconic GS 1966 which showed astonishing fruit purity despite being precisely 50 years on from vintage.

So what insights arising out of the exercise? Firstly, Cab is most definitely a pinnacle wine and SA can mix it with the best in the world. The industry would thus be misguided to forsake it – what’s with that 17.5% decline in plantings over the past decade or so?

Secondly, more work needs to be done on defining what Stellenbosch Cab flavour profile is (debating the differences between the Heldberg and Simonsberg or any other sub-region premature at this stage). It’s as if local producers are caught between two paradigms, these being Bordeaux on the one hand and Napa Valley, California on the other whereas they should have more conviction about being true to themselves.

Thirdly, the best way of uplifting a category is getting people around a table and pulling some corks. That Stellenbosch Cab in particular goes so under-promoted is inexcusable.