SA wine history: On the origins of Constantia 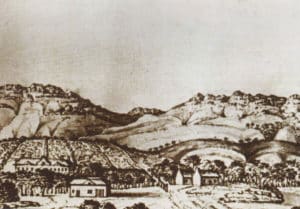 It’s time to introduce Constantia, the vast farm awarded to Cape commander Simon van der Stel on 13 July 1685, the sub-divisions of which go on to produce (historically) the southern hemisphere’s most famous wine, legendary sweet Constantia, as sought after by the Who’s Who of the 18th and 19th centuries, from Prussian king Frederick the Great to American founding father George Washington, from Louis XVI and Marie Antoinette to Napoleon.

Back in 1685, the Deed of Grant for Constantia read as follows:

‘Having taken into consideration the good and faithful services evinced by Simon van der Stel, Commander here under the Honourable Company, respecting agriculture, and in order to encourage more and more his so salutary zeal thereto, we hereby allow, grant and give to him in free and full property a certain piece of ground situated behind the Table Mountain at or near the Steenbergen.’

The grant was for 891 morgen (763 hectares), where ‘morgen’ referred to the amount of land that could be ploughed in a ‘morning’. Encompassing virtually the entire valley, it was about 15 times larger than the land typically granted to vrijburghers, whom it seems Van der Stel was determined to teach by example on his new model farm (even as he continued conducting winegrowing experiments and indeed living at Rustenburg in Rondebosch for a number of years).

Before long he had planted 10,000 vines on the slopes of the Steenbergen (today called the Vlakkenberg), by all accounts including Muscat de Frontignan, Muscat d’Alexandrie, Semillon (‘groendruif’), Chenin Blanc (‘steen’), Palomino (‘white French’) and Pontac (the ‘blood red grape’ or Teinturier Male with its unusually dark flesh).

In 1691, the year of his promotion to the rank of Governor, he built a fine house surrounded by gardens and orchards, and by 1692 his wine was attracting positive feedback from VOC headquarters in Batavia: ‘The wine from Constantia is of a much higher quality than any sent out so far, but obviously only obtainable in small quantities.’

In 1699, aged 60, Van der Stel retired to his farm as a ‘simple burgher’. Having been honoured with the VOC’s courtesy title of Councillor-Extraordinary, however, he continued to host important visitors at Constantia.

In 1705, for example, Dutch minister and naturalist Francois Valentijn visited this ‘loveliest and largest estate of all the freemen at the Cape’ which (he said) produced ‘the choicest wine’.

In his Description of the Cape of Good Hope with the Matters Concerning It (Amsterdam, 1726) Valentijn wrote: ‘It is certain that the old Heer van der Stel brought to his outstanding country estate many sorts of vine sticks from Germany and elsewhere, previously unknown here; also that until now there is no wine to be compared to the red Constantia wine… Here alone is found the choice blue grape which produces the lovely red Constantia wine (which need not yield place in strength and charm to the best red Persian wine or to the Italian Lachryma Christi), and in addition this estate also has an exceptionally good, in fact the best, Steenwyn and Kristalwyn, so divine and enticing in taste, that only a truly fine palate would distinguish it from the best Tosca wine.’

in 1708, the German astronomer and surveyor, Peter Kolbe, was invited to a reception at Constantia, recording: ‘The governor offered me from his own cellar a five- or six-year-old wine which I could – to be frank – not recognise for what it was. On the tongue it was titillating or slightly reminiscent of a Rhine wine. When you drank it you could recognise a clear taste of sec.’

Rhine wine? Presumably Riesling with its high natural acidity (regardless of sugar content). Sec? In Van der Stel’s time ‘sack’ was a term for sweet wine from the Canaries, usually fortified.

At least 70,000 vines had been established on Constantia by 1709, when 5,630 litres of wine were produced from vineyards worked by 60 slaves (according to the Opgaafrolle). But by then Van der Stel was 70 years old, and all alone at the Cape following the disgrace and dismissal of his son Willem Adriaan as Cape Governor the previous year. He died on 24 June 1712, and it’s impossible to guess the extent to which wine production continued until 1716 when the property finally went on auction.

The auction lasted four days, after which the portion later known as Groot Constantia (224 morgen complete with homestead) was sold to Captain Oloff Bergh. The grazing land later known as Bergvliet and the vineyards of so-called Klein Constantia (not the estate we know as Klein Constantia today but a 45-morgen property later renamed Hoop op Constantia) went to the auctioneer, Pieter de Meijer, who made a tidy profit when he resold them just two months later.

Bergh was already 73 years old when he took possession of Groot Constantia on 13 November 1716. A soldier originally hailing from Gothenburg in Sweden, he had acquired considerable wealth during his years at the Cape (his property already included such well-known modern farms as Vondeling and Saxenburg, among others). He had also acquired a wife famed for her beauty: Anna de Koningh, daughter of the slave Maaij Ansela (Angela) van Bengal.

Whether Bergh actively pursued winegrowing at Groot Constantia before his death in 1724 is questionable. Certainly his widow didn’t live there before her death in 1734, when her will listed only two leaguers (1,126 litres) of red wine in the cellar, and no winemaking equipment.

However, Van der Stel’s big shoes had been filled in the meantime by the new owner (since 1718, through marriage) of Klein/Hoop of Constantia. His name was Johannes Colijn and his maternal grandparents had both come to the Cape as slaves from West Africa.

I look forward to introducing him to you properly next time.