Jan van Riebeeck was not a very nice fellow. At best, the letters and journal he wrote detailing his decade as first commander of the Cape of Good Hope (1652-1662) show that he was an ingratiating little toady, constantly trying to find favour with his bosses (the Dutch East India Company or VOC) in the hope of securing a more prestigious posting in the East.

He never quite succeeded.

Unpopular even among the rough-and-ready soldiers of fortune who joined him at the Cape to set up a refreshment station (and who absconded or at least requested transfers in astonishing numbers), not to mention the indigenous Khoi people who soon found themselves cut off from their traditional grazing lands and water sources, Van Riebeeck did not deserve the adulation he received in pre-democratic South Africa. 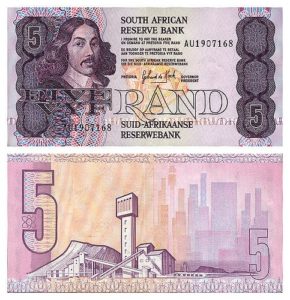 Not JvR but Bartholomeus Vermuyden.

So much of what we were taught about him under Apartheid simply wasn’t true. It wasn’t even his face gracing our old paper currency! (The chiselled features and flowing locks seem to have belonged to a certain Bartholomeus Vermuyden, who never set foot on African soil…).

But one thing’s for sure: it was Jan van Riebeeck rather than Simon van der Stel (of Stellenbosch and Constantia fame) or the vastly over-hyped French Huguenots (of Franschhoek) who sowed the seeds of the South African wine industry.

Even before his appointment as commander, he was pushing for vines to be planted here. ‘Wine acts as a cordial, and strengthens,’ wrote the then junior surgeon in what was effectively his June 1651 job application.

On 13 May 1652, little over a month after arriving here, he wrote to his VOC directors requesting that he be sent cuttings of vines ‘that will grow against the mountains as beautifully as in Spain or France’.

The first recorded arrival of viable vine cuttings occurred on 22 July 1655, when the Leeuwin docked with a single tray of ‘wyngaerd’. It was followed by the Dordrecht with a tray of French vine cuttings and the Parel with three vats (‘tobbekens’) of cuttings.

Although there is no record of what the varieties were, it is generally accepted that they included Semillon, Chenin Blanc, Muscat of Alexandria and Muscat de Frontignan – and at least some of them took root and grew well in the Company’s Garden, for on 2 February 1659 Van Riebeeck wrote some of the most famous words in New World winegrowing history: ‘Today, praise be to God, wine was made for the first time from the Cape grapes, and the new must fresh from the tub was tasted.’

Total yield was a ‘cleyn proeffieu’ of only 12 bottles, but Van Riebeeck had far greater ambitions. He had repeatedly tried to press vine cuttings on the first vrijburghers – men granted land along the Liesbeeck River from 1657 onwards – but found them to be ‘very indifferent’. So in August 1658, ‘during the waning moon’, he planted 1200 cuttings on the land he’d personally been given permission to farm – then known as the Bosch Heuvel or Bosheuvel, today the prestigious suburb of Bishopscourt.

In December 1658 he proudly recorded that his vineyard was looking ‘splendid’ and in March 1659 he reported: ‘Vines of various sorts are thriving excellently and promising well.’

Then came the first Khoi-Dutch war, during which vineyard was ‘completely destroyed’, but he planted a further 1000 cuttings in August 1659 and in September 1660 he was finally able to report that the vrijburghers were ‘nicely following suit’ and planting vines: ‘Hundreds of stocks are given to them, as they can be planted easily on the poorest soil, after the corn has been put into the ground, and without interfering with that work.’

Alas, nobody at the Cape had any idea about winemaking, prompting Van Riebeeck to write to his VOC directors repeatedly for assistance. On 22 February 1658, for example, he wrote: ‘We request you to furnish us with some information regarding pressing, etc, as well as some tools necessary for the same, and if possible, two or three persons understanding the business, for the prospects of an abundant growth of vineyards appear to be exceptionally good.’

On 19 March 1660 he tried again: ‘We are anxiously expecting further information from you regarding the pressing of wine.’

However, all he got in return was criticism for providing insufficient refreshment to visiting ships (based on complaints that he insisted were untrue) and a command to start preparing for his dismissal from the Cape.

Considering winegrowing was the least of his worries by that stage, he devoted a lot of time to it in his parting missive of 9 April 1662, despairing about the ravages of the birds but remaining optimistic: ‘Many vine stocks at the foot of the mountains … are thriving … this season very beautifully, indeed, six times better than those planted previously on the mountain summits.’

He insisted: ‘We have no doubt about the success of the vineyards and grapes, if they are only properly attended to. They will in due course tell their own tale.’