When it comes to the history of Constantia, there are certain stories that every wine lover has heard time and time again. Napoleon drinking ‘vin de Constance’ while in exile on St Helena, for example; Jane Austen writing about the wine’s healing powers on a disappointed heart, etc.

Certainly every visitor to Groot Constantia has heard about the flamboyant Hendrik Cloete, who purchased the property in late 1778 and built the magnificently gabled homestead just over a decade later.

But apart from the obligatory mention of Olof Bergh’s widow, Anna de Koningh, who was famously very beautiful and even more famously born into slavery (but not famously a Constantia winegrower), most guides and history books gloss over the seven decades between Simon van der Stel’s death and Hendrik Cloete’s purchase of Groot Constantia with its ‘ruined’ buildings and ‘exhausted’ vineyards (as Cloete himself described them in a letter dated 15 January 1779).

‘Nothing really happened until the Cloetes came along in 1778,’ a Groot Constantia guide told me with great conviction a couple of years ago.

But how could that be? After all, Prussian emperor Frederick the Great had 409 bottles of Capp Constancia in the wine cellar of his Potsdam castle, Schloss Sanssouci, in October 1777, and even American founding father George Washington was gifted ‘a small Box Containing one dozn Bottles of Constantia Wine’ in May 1778.

As far back as 1744, the cellar at Frederiksdal Castle in Denmark (then owned by Johann Sigismund Schulin, chief secretary of the German Chancellery) was stocked with several bottles of Constanze, as well as some more generic Capvin and Hvid (white) Capvin.

Not to mention that London’s Daily Advertiser newspaper already had an advertisement for ‘genuine red and white Constantia Cape Wine’ in its 11 June 1743 issue, describing the wine as ‘very bright, and of fine Flavour’ (when much of the fake Constantia already cropping up in Europe was not).

To say that ‘nothing really happened until the Cloetes came along’ is to blot out decades of South African wine history that we should be celebrating, including the story of one of Constantia’s most fascinating individuals: Johannes Colijn of Hoop op Constantia (the 1716 sub-division of Constantia originally known as ‘Klein Constantia’, not the Klein Constantia we know today). 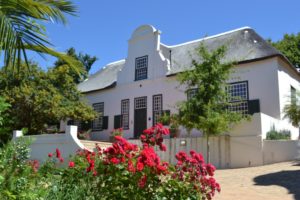 Now a private residence at Groot Constantia, the Hoop op Constantia homestead (which in its heyday boasted three gables) was home to several generations of Colijns. Photo by Joanne Gibson.

The Hoop homestead and old cellar can still be found tucked in a shady hollow a short stroll down the hill from the Groot Constantia homestead. Historically the two farms were separated only by a hedge, and in fact Hoop became part of Groot in the mid-1970s.

Back in 1726, it was Johannes Colijn who provided the ‘red and white Constantia’ that Cape governor Jan de la Fontaine told his VOC superiors he’d be shipping with the next consignment, and on 22 August 1727 it was formally agreed that Colijn would now annually supply the VOC with 10 to 12 leaguers of red Constantia wine at 80 rixdollars each (one leaguer being 563 litres) and 20 leaguers of white Constantia wine at 50 rixdollars each.

Colijn honoured his VOC commitments until 1733, when a poor harvest meant he could only offer 16 leaguers in total. But opportunity knocked the following year when his (absent) neighbour, Anna de Koningh, died. He promptly secured a loan (including some money of his own) for his sister Johanna’s husband, Carl Georg Wieser, to purchase Groot Constantia.

(Note: the First Fifty Years project has Wieser getting married on 20 January 1732 to a conjectured 12-year-old ‘daughter’ of Colijn, named Johanna, but the 13 August 1737 inventory of Johanna’s deceased estate definitively identifies Johannes Colijn as the maternal uncle of her child, not the grandfather, so I’m confident Wieser was Colijn’s brother-in-law, not his son-in-law.)

To begin with, at least, Colijn effectively controlled both Constantia vineyards, and by 1736 his wine was so sought after that he asked the VOC for a price increase. Pointing out that he could sell his red wine privately for 130 rixdollars per leaguer, he requested 100 (up from 80) in return for which he was prepared to continue supplying the white for 50, despite being paid up to 80 privately. ‘He states the truth,’ confirmed the Cape’s Council of Policy in its Resolution of 20 March 1736. ‘It is very reasonable on his part to sell to the Company at so much less than he would otherwise obtain.’

After visiting the Cape in 1741, VOC official Otto Mentzel (later chief of police in Frankfurt, Germany) wrote that Constantia consisted of ‘two vineyards and two homesteads, the older one of which was erected by Governor Simon van der Stel, and the other in better architectural taste by a later owner, a burgher… Both produce similar red and white wine; only connoisseurs can distinguish some difference in flavour.’

So who exactly was this ‘burgher’, this Colijn who made such highly sought-after wine and perhaps had better architectural taste than Van der Stel?

His father was the Netherlands-born (circa 1650) Bastiaan Colijn; his mother was dismissed by at least one genealogist during the Apartheid era as ‘onbekend’ (unknown).

This couldn’t be further from the truth.

His mother was Maria Everts, generally known as Swarte (black) Maria Everts, and she was the Cape-born (circa 1663) daughter of Evert and Anna, slaves brought to the Cape from Guinea, West Africa, in 1658. (Hardly the ethnic background one would have wanted to publicise during the height of Afrikaner nationalism for a fairly prominent ‘white’ Afrikaner family…)

Enslaved until 1671, when she was about eight years old, Everts was baptised on 29 March 1676 and on 5 November 1679 she married a fellow ‘free black’, Jackie Joy van Angola. The couple separated only eight months later (after he accused her of trying to poison him) but this union at least partly explains why she never married Bastiaan Colijn. Named as his ‘concubine’ from 1685 onwards, she had four children with him: Johannes (baptised on 26 December 1692), Johanna (baptised on 9 April 1694), Maria (baptised on 27 May 1696) and Evert (baptised on 3 October 1700).

While the Opgaafrolle reveal that Bastiaan Colijn’s possessions never amounted to much more than the flintlock, sword and pistol carried by all vrijburghers, Everts became an exceptionally wealthy woman in her own right. By the time of her death during the 1713 smallpox epidemic, her property included 60 morgen ‘aghter de Kloof in Tafel Valley na de seestrand toe’ (present-day Camps Bay), the farm De Mosselbanks Rivier in Durbanville, and Clavervalleij near Darling, not to mention 10 slaves overseen by a white knecht in her employ.

In her will, dated 8 June 1713, she named her six children and Bastiaan Colijn as equal co-heirs (including two older children not fathered by him, namely Jacobus Willemsz Ten Damme, baptised in 1679, and Cornelia Everina Kraak, born in 1682). After Ten Damme also succumbed to smallpox, however, his share of his mother’s estate was further sub-divided between his siblings and step-father, with 300 sheep, a wagon with 10 oxen, and a slave named Alexander van Madagascar specifically bequeathed to Johannes Colijn.*

All in all, Johannes Colijn was a man of some substance when the new owner of Klein/Hoop op Constantia, Jan Jurgensz Cotze, died sometime before 1 May 1718 – the day on which Colijn married Cotze’s widow, Elsje van Hoff. And she, too, rather remarkably, was the daughter of a woman born into slavery around 1660, namely Margaretha Jans van de Caep, the halfslag daughter of Lijsbeth of Bengal and the vrijburgher Jan Coenraet Visser (we’ve met him before).

Having risen through the ranks to become the Slave Lodge’s first schoolmistress before her manumission at legal majority (22), Margaretha married the Norwegian vrijburgher Lambart van Hoff in 1685. Her half-sister, moreover, was Maria Hendricks who in 1690 married Johannes Pfeiffer, an enormously wealthy holder of the wine pacht (among other lucrative monopolies, as discussed here). In her will dated 13 April 1713, Hendricks named her niece Elsje as her universal heir, which no doubt added to the Constantia widow’s extreme eligibility – and Colijn was the man she chose.

Sadly she died sometime before 23 September 1724, which is when Colijn (who inherited Klein/Hoop op Constantia alongside his step-son ‘Jan Coetsie’) married his second wife, Johanna Appel, the daughter of Ferdinandus Appel and Levina Cloete.

Yes, indeed, Johanna Appel was the first cousin of Hendrik Cloete, the man who would purchase Groot Constantia for just 60,000 guilders in 1778 (two years after Colijn’s son, Johannes Nicolaas, purchased Klein/Hoop op Constantia ‘very cheaply from his parents’ for 61,680 guilders – a noteworthy price comparison given that Groot was still five times larger than Klein/Hoop).

A lot had happened in the meantime (kicking off with the ‘coloured’ Colijn siblings as master and mistress, respectively, of the two celebrated Constantia vineyards) but for now it suffices to say that, from 1778 onwards, Colijns and Cloetes farmed alongside each other, both producing the world-famous Constantia wine, right through British occupation (when the authorities recorded how much more co-operative Mr Colyn was with supplying Constantia wine than the ‘morose, uncouth, and churlish’ Mr Cloete with his ‘groundless representations’) and right through the glory years, until both families were declared bankrupt (in 1857 and 1872 respectively).

I find it bewildering that the Colijn story continues, by and large, to be ‘whitewashed’ out of South African wine history when surely, in these more enlightened times, it should be celebrated? I can only hope that this column, on this platform, remedies the situation to some small extent.

*The original version of this article stated that Bastiaan Colijn did not inherit an equal share of Everts’ deceased estate but would merely be provided ‘with food, drink and clothing as necessary’ (based on an incorrect translation of the will in the First Fifty Years entry for Maria Everts). In fact, as pointed out by Mansell Upham here, the will stated unambiguously that Colijn should co-inherit equally.