Just how much trouble is SA wine in? 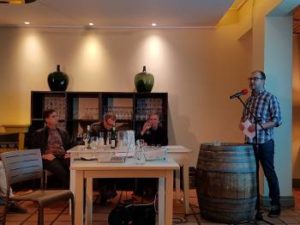 Where were the representatives from the big producer-wholesalers at last night’s second annual Ex Animo Address? The event, organised by David and Jeanette Clarke who own a wine agency by the same name was held at Joostenberg Bistro outside Stellenbosch and saw the acclaimed Rosa Kruger speaking on viticulture, Mulderbosch winemaker Adam Mason on the challenges facing winemaking in Stellenbosch and publisher JP Rossouw on branding, all proceeds going to charity.

Kruger suggested that if the South African wine industry was to shake its persistent “cheap ‘n cheerful” image then there were two key challenges to be tackled, these being 1) leaf roll virus and 2) worker skills. “Leaf roll virus is what’s killing our industry. Very few are following the protocols – plant clean material and keep it clean,” she observed. Regarding worker skills, she said “great terroir needs great viticulture” and this depended on the education and training of workers. Producers were compelled to upskill their workers not just as a means of improving efficiency but also because this was a means of giving workers dignity and fighting winelands scourges like TB, Aids and alcoholism.

The 2016 vintage had been “kooky” for Mason on account of being super-early and because of the various winelands fires. Vineyards in Stellenbosch were increasingly under threat from 1) urbanisation, 2) climate change and 3) reduced profitability. He predicted that vineyards would increasingly become uprooted. “It’s the march of time and can’t be stopped. That said, producers who want to persist are compelled to implement a process of beneficiation. Pockets of excellence will remain. Dryland farming is a huge opportunity.”

Rossouw, responsible for Platter’s and his own restaurant guide, suggested that making fine wine was something undertaken against the odds, a romantic endeavour and not about logic. If producers were to succeed, they were compelled to think about how to add value as opposed to the “strip mining approach” which applies in some quarters of extracting value without insuring sustainability in the long term.

He said that improving on wine quality over time was a given but that was “only half the proposition” and that many producers were failing to create brands. “Most consumers know nothing [about wine]. You have to convince them to purchase and in order to do that, you have to operate on an emotional level. It’s about extrinsics not intrinsics.” He suggested that presenting wine strictly as an agricultural or scientific product made it appear unnecessarily complicated and removed the fun that was inherent in wine.

In order to succeed, producers needed to instil a sense of confidence in consumers that they were making the right choice and such consumers would in turn become “brand disciples”.  Pricing and packaging needed to be “dangerous” rather than conservative as this forced the individual producer to stand behind his product.

Good competition results were vital for reassuring the insecure consumer and even served a purpose when it came to “wine wonks” who enjoyed the “parlour game” of deciding whether or not they agreed with a particular rating. “Stickers travel with the bottle and go where you can’t go,” he said.

Finally, Rossouw said that one of the best ways of standing out in the market place was the producers themselves engaging with consumers recognising that the “cult of personality” went a long way to building a brand. “It’s about sending your best fighter into battle,” he said. “The less confusion in the mind of the consumer, the better and it all comes down to communication”.

Three provocative presentations and yet only some 80 people in the room, the irony being that many of them were producers who already making some of South Africa’s best wine. Alongside the various challenges listed above, another is that leaders, which is to say proactive individuals prepared to take responsibility for the future of their industry, are thin on the ground.