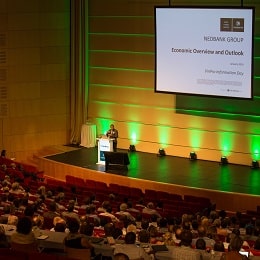 My previous post (see here) was a prelude to the annual VinPro Information Day and it just feels neat and tidy to do a post-mortem after the fact. More than 700 attendees from all corners of the wine industry descended upon the CTICC last Thursday for what many consider our industry “state of the nation”. The day had a more low-key approach than 2015 when Jancis Robinson was billed as the keynote speaker, causing much buzz among local press. This year the day had a theme: “Changing the Wine Game”. But have we made any steps to change anything at all? And will we?

The mood on the day was relatively muted and definitely somber – many producers were preoccupied with the raging Simonsberg fires (which as an event went noticeably unmentioned by any of the speakers or anyone from VinPro) and if that wasn’t bad enough, we started the day off with the traditional economic outlook, presented by Isaac Matshego from Nedbank. His outlook was as bleak as we expected but he managed to present the cold, hard facts with just enough humour to keep us all from weeping in our seats.

I’m not going to DDX the entire day in detail – the presenter presentations are all available on the VinPro website for review (see here) and I would urge everyone go have a look. In general, all the speakers handled their topics very well, with some (like Chriso Conradie, manager of VinPro’s Wine Cellar division and Infostrat’s David Venter) hitting us with a fire and brimstone fervor akin to Baptist preachers of old.

My question from before still stands though: will we really change anything? I sat next to media relations expert Emile Joubert who at the end of the day gently chided me for my enthusiasm, suggesting that if you’ve sat through the last 10 VinPro information days, the ‘change the world/change the wine game’ message would bring about more dejavu than anything else. I think there are many who share that sentiment – along with other emotions including bewilderment, confusion and a general feeling of it all being a little overwhelming.

Perhaps that’s why we’re at the point where even our industry bodies are calling for a change in the status quo – because we know South African wine is not where it should be, and definitely not where we want it to be. But to actually affect the changes necessary is such a mammoth task, that once you consider the imposing amount work required, suddenly where we are and how we are doing doesn’t seem all that bad so why don’t we just keep doing what we’re doing a little while longer. No harm, no foul.

If the experts are to be listened to, the clock has run out on that attitude. Big harm. Big foul. Our wine isn’t sexy. Our image isn’t sexy. We aren’t cool. We’re not the new kids on the block. We’re also not the big boys in the playground. Our industry isn’t as well known as we think it is. And when it is, our wines are often shoved in the wrong class or price category. Brand SA might be all rainbows and kittens and unicorn dust within the borders of our undoubtedly beautiful and amazing country, but from the outside we’re just another indistinguishable drop in a pretty large bucket.

This was only my second VinPro information day, and the first where I actually felt I knew enough about the world of wine to have an opinion. I don’t know much, but I know some about exports and specifically selling SA wine in USA – supposedly one of our focus market. I know it’s time that the high-level goals be translated into bottom-up strategies. Step by step. On every level. With everyone paying attention. Otherwise come January 2017, we’ll all have VinPro dejavu.

Vinpro approaches courts to overturn the ban on wine sales

Industry body Vinpro is set to approach the Cape High Court regarding the current ban on local wine sales. According to an official statement, urgent interim relief will be sought...