Michael Fridjhon: More on the aesthetics of ultra-premium red wines

Christian Eedes, editor of this site, never opens a can without expecting to release a few worms. It’s his job to prod corns and bruises, to light firecrackers next to sleeping lions. Years of doing this has taught him to know how and where to nudge. When he suggested recently that maybe we need to re-think our aesthetics when it comes to ultra-premium wines (see here), he was both stating the obvious, but also suggesting that producers and wine marketers might be missing a trick. I suspect his comments were largely disregarded by the audience he writes for: Winemag’s readers presumably share the stylistic views of its wine judges, and they haven’t exactly been in the vanguard of rewarding super-ripe, over-oaked, over-alcoholic gooey reds. Both of these issues presented themselves – one less directly than the other – at the inaugural Strauss&Co-Wine Cellar auction.

On the matter of aesthetics and price the debate centres around whether, if our wines were made more in the style of the Napa cult reds, they would attract more demand and therefore fetch more. The idea is worth unpacking: are we losing out on potential high-end buyers because we insist on making wines which are savoury rather than opulent, detailed rather than plush? There’s no doubt that many of the Parker 100-point Californian reds are created sumptuous and seamless, clearly addressing an implicit spec which says that there’s a generation of consumers who don’t like discernible tannin.

“Super-rich” and “highly textured” is a proxy for sweet: there’s nothing to cause the palate any discomfort. If you’re wealthy enough to afford the $500 – $800 that some of these trophy wines fetch on release you’re entitled to want to drink the vinous equivalent of filet steak – something where tenderness replaces taste as the crucial criterion. So the key question is – do we have an undeveloped (or under-developed) segment at the top end of the market, customers we’ve never brought to wine because the taste of what we like (or at least what we choose to make) is too austere to attract them. 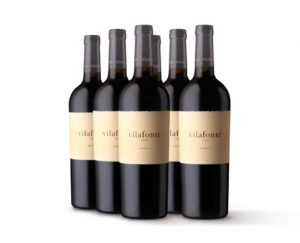 If there is really merit to the suggestion, we aren’t going to answer it by sucking our thumbs. The idea needs to be tested or at least exposed to analysis. At this stage, all we can say is that based on the available evidence, the odds aren’t looking good. There are some massively textured wines which enjoy a high profile, and pricing to go with their image. A few of them were on the Strauss sale. The most obvious example is Vilafonté, which is unashamedly opulent. It’s also a very fine and thoughtfully made wine, the true expression of ripe fruit intensity kept fresh rather than savoury, accessible from the moment of release and yet clearly age-worthy. Every lot of Vilafonté sold, but basically at around low estimate (which was still high enough to banish the word “bargain” from the conversation). Most of the parcels were sold to a phone bidder: there certainly wasn’t sufficient interest in the room to chase up the prices.

This suggests that the best of the South African wines made in the Californian vernacular have not achieved the kind of traction enjoyed by the Sadie Family (though, to be fair, the volumes from Sadie on the auction were much smaller, making the prices achieved slightly artificial.) There were other well-known brands made in the more sumptuous style. De Toren is the obvious example, though arguably Mvemve Raats De Compostella and the more obscure 4G could be counted in the club. Some of the De Toren went unsold, while the MR and the 4G scraped in at low estimate.

We can’t know what we don’t know: for this to be a meaningful exercise we need to see if the well-heeled drinkers of premium alcoholic beverages (Johnnie Walker Blue Label for example) and who presently don’t drink wine would be won over if they were offered the super-plush examples as a point of entry, instead of the super-savoury big names which dominate. This strategy appears to have worked in China, and rumour has it that more La Motte Hanneli R is sold outside our borders, than at home.

The second part of the question relates to whether, if this potentially untapped market exists, South African wines would sell for the kind of prices producers here dream of, rather than attain. Firstly, we would have to produce a whole lot more of the sumptuous reds which provoked Eedes’s comments in the first place. Then we would have to hawk them potential buyers who presently aren’t drinking wine. They would have to be the kind of punters for whom R3k per bottle upwards is a trifling amount (or R10k per bottle in the kind of establishments they like to frequent.) Unfortunately – for those contemplating this prospective market – this is exactly the target group whose revenue streams are under scrutiny at the Zondo Commission. Those who dream of a booming market in R5k and upwards reds forget that there’s no reason for it to exist here. We earn in Rands, we spend in Rands, and relative to middle-class salaries, all but our genuine trophy wines are fairly priced. There’s no point in looking enviously at what cult First World wines trade for, converting their hard currency prices to devalued Rands, and then assuming you can perform the same exercise in reverse.

The one thing the inaugural Strauss-Wine Cellar auction proved is that the market for R2k+ bottles is minuscule. If you create wines to bring in more buyers, you may increase the number of consumers, but you won’t create the shortage essential to driving up prices. There will be a new equilibrium with more punters, but also more wines. It’s a thought-provoking idea Christian, but there are no worms in the can – only red herrings sailing across the horizon.