The impassioned pleas of the wine industry for an increase in the price of grapes or bulk wine have been based on the commercial reality confronting growers in the Cape. Depending on what you consider “under-recovering on input costs” somewhere between 40% and 70% are losing money. At this rate of attrition most could be out of business in the next decade.

We’ve already seen that this won’t mean that we’ll all have to drink bulk wine sourced from Spain, Argentina and Bulgaria just to manage our cholesterol levels. As growers in the so-called Coastal Region throw in the towel, industrial grape farmers in the Northern Cape bump up the yields from their riverland irrigation vineyards. For every 10 hectares of old vine plantings in and around Stellenbosch that are transformed into a new housing estate to serve as a dormitory for Cape Town commuters, one hectare of nice flat irrigation land in the Northern Cape can replace the literage.

There’s no reason why cheap bulk wine for cheap bulk wine brands should not come from the sun-filled water-rich Northern Cape. When they use the word “terroir” there, they usually mean a breed of dog. Certainly, the mechanical harvesters working the long straight rows of high-yielding vines are as important to the low cost of viticulture as the relatively disease-free environment. If all that your brand requires is healthy grapes with a hint of varietal character there’s no need to spend more.

More than 50% of all wine sold in South Africa falls into this category – because that’s the volume that appears on shelf at under R50 per bottle. To make a profit at this price point you need to get your fruit into the cellar for around R5k per ton or less. In the Coastal Region this could translate into a loss of around R20k for hectare. In the Northern Cape you could pocket R50k – R100k after farming costs.

It’s increasingly unlikely that what is euphemistically called “table wine” will come from the traditional production areas. Raise the price point to a retail of R100 and most growers can make a living – since the dry goods, transport and excise components don’t change and the wine value simply gets better. In fact, at R100 there’s no excuse for not making money. R30 covers all the hard costs, leaving R30 for wine (and R40 for wholesale and retail margin). R30 for 750ml of wine is R40 per litre all-in, which, after processing cost and some oak, could be at least R15k per ton.

At this point the key differentiator is volume – and here the problem is that 50% of all the country’s producers crush 5000 cases or less. Businesses this small are marginal at R100 per bottle because there’s too much overhead for the available volume, and they can’t afford to become bigger because they can’t afford to invest in branding and marketing strategies. 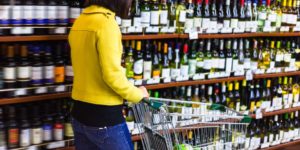 How much wine is getting sold at over R100 a bottle?

Unsurprisingly we see that the really small guys try to push past this glass ceiling and fish for business in the R120 to R200 pond. Depending on what tickles the palate (or flatters the ego) of the buyer, this appears possible – or at least attainable. That is why at a recent trade tasting of a range of wines from a variety of cellars, I saw 20% of what was on offer targeting the R100 – R200 price point, 35% the R200 – R300 bracket, and 15% hoping for R300 or more. As you can tell, very few were aiming for much under R100 and none less than R60.

Herein lies the small producer’s dilemma. Probably no more than 15% of all bottled wine sales in South Africa take place at the R100+ mark and I would guess that the majority of these sit in the R100 to R130 range. Those whose survival strategy depends on this price point or above will find the space desperately crowded. If their business model doesn’t allow for the vast majority of their sales at R100 or a bit less, then all the pricing optimism in the world won’t save them – and the current recession will carry them off like the victims of a medieval plague.