I’ve been attending wine auctions for longer than most of the winemakers in South Africa have been alive. I missed the first Nederburg Auction because I was studying (in a manner of speaking) in France in 1975, but I’ve been to most of them since then. In addition I used to be the wine consultant for Sotheby’s in the 1980s so I was directly involved in all of the CWG Auctions (branded in those days as CIWG) hosted under the auspices of Sotheby’s, as well as the Sotheby’s fine wine sales. I’ve also conducted charity auctions for a couple of decades, as well as a few commercial sales. In short, I know (or should know) a little about the dynamics of a successful sale, and how much the result fairly represents the truth.

Firstly it’s worth being cynical about a number of metrics offered by auction organisers when they put out their media releases at the end of a sale. Volumes on auction vary, so overall turnover could be adversely affected by fewer lots. Average price per bottle or per litre is an attempt to compensate for this, suggesting that it is a measure that works independently of whether or not the volumes increase or decrease on a year-on-year basis. This is all very well – in theory – but when times are tough and you are trying to use the average price method to prove the success of the sale, the first thing you do is reduce volumes. If there’s less to buy, there will be greater competition between bidders for fewer lots. Both Nederburg and CWG have been putting less wine on auction over the past couple of years: no matter what you may hear from the more delusional of your sources, there’s a massive downturn in consumer spending, and it’s been declining for sometime. 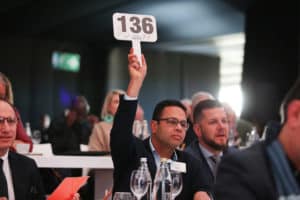 Miguel Chan of Tsogo Sun at the Nederburg Auction 2018.

This year’s Nederburg auction seems to have done quite well – both on paper (see sales figures here) but also in the less tangible metrics. Volumes were about 25% down, but average per bottle prices were up by just under 10%. Nothing astonishing in this, but still quite a good result. (The Guild reduced volumes last year and still sustained a drop in average prices). More interestingly, there were no unsold lots at Nederburg: this suggests that wines were pretty fairly priced. It’s therefore also worth looking at the premium-to-reserve prices to know that the wines didn’t just scrape in. There were few truly outrageous prices (a very subjective judgement, but an easy test of sanity in the bidding environment) and a lot of wine selling in the upper-midpoint of the ultra-premium market. (If you need a way to test the state of mind of those bidding in a heated environment, just look at last year’s Guild auction where the Kanonkop Paul Sauer – admittedly in Guild garb – sold for more per bottle than the estate was charging for magnums at the cellar door).

There was a real breadth and depth to the Nederburg catalogue: lots of smaller producers, plenty of independent players – despite the fact that the bulk of the volumes came from the host’s cellar. There was also a spread of vintages, even before you take into account the very small parcels of truly ancient wines which nudge up average per bottle prices but also help to communicate how well the old-timers made wine. The Nederburg Auction had been on a bit of a rollercoaster ten or fifteen years ago but lately it’s settled down: less glitz and more gravitas and a clear path forward.

Three weeks later – to the day – the Guild’s wines came up for sale and the results did the organisation proud (see here). Despite the depressed market conditions there were some very impressive results – including Kanonkop regaining the crown for the most expensive wine ever sold on the auction (R22 500 for a six-bottle case of the Paul Sauer 2015). Once again however, it makes sense to unpack the statistics. As with Nederburg, the Guild decided it was prudent to reduce quantities on offer – this time by 30%, just to make sure that the average case price didn’t decline again. Unsurprisingly, average prices were up on 2017, but still down on 2016. If you take account of inflation, 2018 prices were effectively at least 15% lower than in 2016. This is also evident in the actual turnovers. This year the Guild achieved R10.5m. Last year the figure was R13.2m (on a larger volume of wine). In 2016 it was R13.8m which, if adjusted for inflation, would be closer to R16m in today’s terms.

What does this mean for wine drinkers? Firstly, that the hype of auction results should be taken with a meaningful slug of water. Secondly, that as consumers we should know better than to be impressed with these metrics. Is a sale successful because a few prices were wildly out of line? Is it clever to sell less wine for more Rands per case (for cosmetic reasons) when surely the business is about selling most wine at the fairest possible price? Do manipulated prices help the industry overall?

Another feature which is hardly touched on is the growth of the ultra-premium sector outside the auction environment. Ten years ago most of the wines selling for over R300 per bottle (in those days) were traded at Nederburg or the CWG. That R300 amount, adjusted for inflation, is now around R700 and auctions account for a fraction of the sales in that segment. It seems South Africans are ready to pay ever higher prices for collectable wines – but they’ve worked out that the auction environment might not be conducive to the most rational shopping.