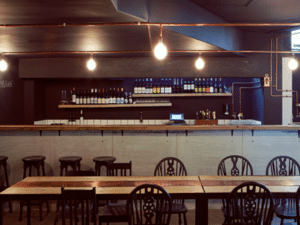 If you were a martian whose only knowledge of South African cultural life was derived from your online access to WineMag, you might extrapolate from your reading a number of certainties of what life would be like in the land where WineMag held sway. One of these is that the place would be teeming with wine bars. After all, if the culture of wine generated this volume of text, surely the readers would spend the better part of their leisure hours drifting from wine bar to wine bar sampling the latest additions to the nation’s oenological library.

Sadly we know that the truth is a far distant reality. Why this is so is something of a conundrum. If we all like wine so much, surely there are enough people out there to make wine bars the most vibrant of industries? What would not be evident however (to a martian or anyone else unfamiliar with South Africa) is the relative absence of a pub culture among the wine-drinking classes. Inherited by the whites from the blue collar establishments in their colonial home bases, the “whites only” bars of the old South Africa sold beer and hard tack. The township shebeens that played a key role in black urban life (from the Prohibition era and onwards) had their antecedents in rural community life, where the beverage of choice was also beer. Partly, beer lends itself to this kind of environment, it’s packaged in drink size containers or available on tap, it’s relatively low in alcohol, so you can drink a couple over the course of a two hour sojourn in the pub, and you can then get on with your evening.

Wine – especially good wine – does not come in packaging that favours by-the-glass consumption. The risk of deterioration – once a bottle has been opened – is too great for a licensee to go on spec with anything more exciting than the most commercial of releases. Of course, there are now myriads of devices which have been designed to ensure that even the best wines can be drawn from a sealed bottle on a glass-by-glass basis with the void filled by inert gas. Most of these are costly, leading to a chicken-and-egg situation: until there’s a proven market for the investment, no one is going to throw that kind of money at the idea, and there won’t be a market until someone takes the risk, and invests in developing it. Of course there are a few wine bars, and some which do have expensive by-the-glass dispensers. Either they haven’t taken off, or the market is saturated. What is clear is that no one is making so much money from by-the-glass wine sales that hundreds of competitors are queuing to open up in an adjacent site. There are bars with a limited wine offering, but their bread and butter is gin and beer.

Wine by the glass can also never expect to compete price-wise with the other pub beverages. Interesting wines, with a name known even vaguely to the general wine consuming public, are not cheap. Assume R100 per bottle and 4 glasses to a bottle – that’s a unit cost of R25. You have to cover the risk of loss of bottle contents through deterioration, or the cost of sophisticated dispensers, so even before the publican marks up for better quality glassware (which will break more frequently than beer mugs), service, rental and profit, you’re probably looking at a base cost of R40. Add the price of product expertise (a wine bar is not stocked by a single call to SAB and a couple of craft brewers) or selling know-how and suddenly your wine by the glass is closer to R100. One glass of wine (185ml) represents as much alcohol as you can safely consume without food, or an Uber (with its own cost) to take you home. Then there’s the actual question of the food itself: wine is seen – perhaps more so in SA than in other Anglophone countries – as a beverage to accompany a meal. This poses an extra difficulty: what the Brits like to call “Gastro-pubs” (I always think this means a place where there’s a high risk of food poisoning) are almost as rare here as good value wine lists.

Finally there are other, more extraneous, factors: one is the propensity of licensees to allow distributors and retailers to take ownership of their wine businesses in exchange for listing fees: people with that kind of mentality could never begin to engage in the far more complex world of wine bars – and why should they, as long as their suppliers will pay them to do as little as they do. These are not the entrepreneurs ready to take the risk and build a wine bar business. There’s also the question sites and rentals: South Africa has probably the most concentrated ownership of commercial centres in any vaguely developed economy, with four or five companies owning over 80% of the suitable properties. Given issues of security, well-to-do South Africans gravitate towards shopping malls, food malls – even cities within cities like the Waterfront. Owners of these properties require the kinds of guarantees and sureties from prospective tenants that would discourage someone with a wine bar idea from even taking the chance. In turn this leaves little enough potential space for such establishments to become a dominant culture.

None of this means that we won’t ever see wine bars dotting our hospitality landscape: there are a few, there will be more, though mostly they will be mixed beverage businesses, pubs or even gastropubs with a great by-the-glass offering. But I think wine bars will – at least for the foreseeable future, remain niche, enterprises of passion offering a service to tourists and to equally passionate domestic consumers, many of whom have ample supplies of wine at home, which is where they prefer to drink it anyway.