Unsurprisingly, the announcement by Winemag of the results of the Prescient Cabernet Report (which saw almost half of the 94 entries scoring 90 points or more) produced a flutter of commentary in the Twittersphere (see here). Winemag chose to attribute this incontrovertible evidence of ratings devaluation to the “explosion” in quality in the 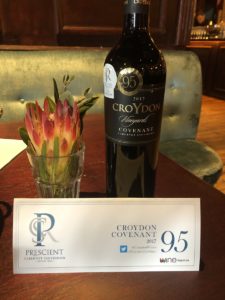 category. I chose to call it score inflation/bracket creep.

Some of the commentators excoriated me for my lack of patriotism, blithely re-tweeting/liking Greg Sherwood’s observation “Funny how people only want to talk about score inflation or bracket creep. Why does nobody ever consider the fact that SA is making better wine than ever…”. I’m as ready to believe in miracles as any agnostic, but the chances of our winemakers upping their game to this extent in the space of two years is about the same as Os du Randt walking on water and significantly less than Pastor Alph Lukua raising the dead.

There is a direct connection between score inflation, higher prices in the deluxe wine sector and the growing disconnect between the geek and the consumer side of the market. Higher prices fuel the belief that others should be paying more for our wines: “if we have so many wines sitting comfortably in the nineties, so the logic goes, surely the on-shelf prices should be higher?” This assumption is under-pinned by another more insidious one – which is that the higher scores have been achieved because the wines have improved dramatically, not because the calibration has become particularly elastic. It’s like weighing the same mass on earth, and then on the moon, and announcing a massive loss in weight.

There’s no doubt that average wine quality has been improving, but this is just as true of winemaking almost everywhere – in Argentina, Bulgaria and Canada, for example. All the wines are getting better because the science is getting better; younger, better trained winemakers are taking over from the more rustic old school; less of the viticulture is being left to chance.

These are considerations which extend beyond the realm of wine production. By way of an analogy consider the field of maths education: the standard required for a distinction in matric maths is higher now than it was fifty years ago. So why do we moan that about the under-performance of our educators? The answer is simple: the issue is not about a comparison between the maths skills which worked in the past – it’s about the fact that the maths standards required for success in the modern world are higher than the average achieved by our school kids today. We all wish our producers to earn more money, but lowering the pass requirements and then celebrating the higher numbers reflects the same sleight of hand as the annual announcements celebrating the reduction in the failure rate.

The financial success of the Cape wine industry does not depend on the wines doing the rounds in Geeklandia, the notes and scores about them in Winemag, and the self-righteous anger of the commentariat (many of whom get to drink wine for free) about the importance of higher prices. This is all pressure-cooker street theatre in the wine industry’s equivalent of a university campus where very few of the participants and their audience have worked in the real world. It’s no different from Jake Zuma assuring his equally gullible followers that unemployment will shrink and the economy will grow. Wishes, sadly, do not make horses…

The higher prices we all so fervently want others to pay will not be achieved by talking up the quality of what is available using the devalued currency which comes off the printing press of over-generous Winemag panelists. This may help briefly by bringing a focus to those who do well in order to encourage better performance all round. In the context of the schooling system analogy, it makes for a more inspired student group. It’s not of much use if they still can’t get jobs.

The real space where pretty much nothing is happening is where 90% of all Cape wine sells, which is below R100 per bottle, and where half of that number still trades under R50. Hard costs increase inexorably every year but grape prices remain resolutely low, save for those years where chronic shortage (due to weather conditions) nudges up average per ton prices, but for a smaller crop.

All that has been achieved as a result of the drought is that producers of distilling wine have achieved R6-50 per litre, which is the base price for very ordinary table wine. That’s good for them, but mostly this wine is coming from heavily cropped inland areas, and these prices aren’t helping to save vineyards in the (more premium) coastal region. The boom is also short-lived: once volumes are back to normal, prices will drop. There’s also a price ceiling (whether for cheap table wine or distilling wine) and this is determined by the landed price of bulk wine from abroad.

So in a way, it’s a web of half-truths and might-be-possibles. Quality is nudging upwards, aided partly by better technology and competences, partly by some good vintages. The improvement is nothing like the score inflation would have us believe. The increase in grape and bulk wine prices is a result of adverse weather conditions and vineyard loss. Very little of this dynamic is helping to save those plantings which could make a meaningful contribution to our fine wine industry. It’s not the job of the Winemag Prescient panel to talk up grape prices – that’s merely a by-product of dishing out higher ratings. However, it should understand the consequences of feeding puffery into the lethal cocktail of the wine industry’s pricing crisis.

Michael Fridjhon: Where to for the Cape Winemakers Guild?

The Cape Winemakers Guild Auction has come and gone: raising a reasonable amount of money for the producers, but also for the Trust – which in my view has punched...

Taking a pot shot at the folk charged with building South Africa's wine image abroad is a little like looting when the cops are around to help manage the crowds....