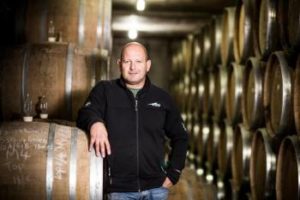 Thelema, situated on the Helshoogte Pass in Stellenbosch, is a family owned and managed wine estate and the home of Thelema and Sutherland Vineyards wines, the latter from Elgin grapes. Rudi Schultz has been winemaker there since 2000 and we spoke to him about his experience working with Shiraz.

Thelema is known for its Cabernet Sauvignon but you also work with Shiraz. What do you like about the grape?
Shiraz is really versatile and the resulting wine talks to you about where the grapes were grown.

And what are the biggest challenges of working with Shiraz?
Avoiding a “fruit bomb” and finding the ever elusive “savoury” notes. You also need to keep an eye on crop levels.

You bottle your Stellenbosch wine as Shiraz and your Elgin wine as Syrah. Two names for the same variety. Explain what you think the difference in style that each suggests?
The Stellenbosch Shiraz is a “New World” style with a touch more new oak, plenty of expressive fruit and firmer tannins. The Elgin Syrah is a softer wine with finer tannins, handled gently from beginning to end.

How many hectares of Shiraz in Stellenbosch? And in Elgin? How old are the vineyards?
We have just under four hectares on the Stellenbosch property, the first plantings dating from 2000/2001. The Elgin vineyards were planted in 2005 and amount to seven hectares.

Talk to us about the differences in growing conditions between Stellenbosch and Elgin.
Stellenbosch is slightly warmer than Elgin so we harvest a bit earlier. Stellenbosch tends to give shriveled berries but we want to avoid jammy flavours . We aim for nice open canopies with sufficient light getting in to the bunch zones

Elgin tends to have more vigour in the soils, which results in bigger vines and more shading than the Stellenbosch vineyards  and this possibly equates to the wine being towards the darker end of the fruit spectrum.

Whole bunch ferment is gaining popularity as a winemaking technique for Shiraz although you don’t use it. How do you feel about it in general and would ever consider applying it in the future?
We have intermittently dabbled with percentages of whole bunches in the ferments –  it depends on the visible ripeness or lignification of the stalks. We currently get really nice ripe, fine tannins without whole bunch but that’s not to say we will not use this technique in the future.

Have you ever been to other Shiraz-producing regions in the world? Tell us about your visits.
I spent a month working in the Southern Rhône – I went bouncing over the round stones of Châteauneuf Du Pape and more south in Gigondas and Vacqueyras. This was back in the early 2000s and the value for money of Gigondas and Vacqueyras was exceptional.

What do you consider as world benchmarks when it comes to Shiraz/Syrah?
Beaucastel , René Rostaing, Cuilleron and Clape come to mind…