The phenomenon of “ratings bunching” – a range of wines which vary widely in terms of style and price receiving the same score – has been pointed out by various users of this site recently and I stand guilty as charged – the overall standard of winemaking is now so high that there is very little to differentiate the vast majority of wines in purely technical terms any more.

The problem is exacerbated in that it has been general policy to publish reviews only of wines that have at least some inherent merit – to guide users to what they might want to drink rather than make too much of what they should avoid. There are supposedly over 8 000 current-release local wines on the market and getting featured on this site at all is surely some kind of achievement. 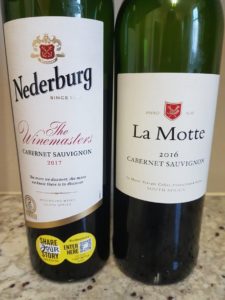 That said, I increasingly accept the argument that not posting reviews of “lesser” wines leaves users of this site with no means of calibrating. What, for instance, would I make of The Winemasters Cabernet Sauvignon 2017 from Nederburg?

Nederburg now falls  under  Libertas Vineyards and Estate, the new stand-alone company created by producer-wholesaler Distell to oversee premium wines brands and there are a number of examples of single-variety Cabernet Sauvignon from this cellar – the Two Centuries 2014 (R450 a bottle) rated 5 Stars and was Red Wine of the Year in Platter’s 2018 while The Manor House 2015 (R175 a bottle) rated 95 on the 100-point quality scale and was the best wine overall in last year’s Prescient Cabernet Sauvignon Report.

Selling for between R100 and R120 a bottle depending on which retail outlet you choose, the Winemasters is not quite entry-level (that would be the 56Hundred with an approximate retail price of R65 a bottle) but is probably intended more for every day rather than special occasion drinking.

According to the online fact sheet available via Wine.co.za, grapes were sourced from around the Western Cape, maturation in wood lasting 8 to 10 months. Alcohol is 14.55%, residual sugar 4g/l, pH 3.69 and total acidity 5.94g/l.

The nose is extraordinarily primary with lots of berry fruit plus the merest herbal whiff while the palate is juicy and soft. Technically sound as you’d expect from the biggest producer in the country, fun and easy to drink, but lacking in complexity and length, I rated this 86/100.

La Motte in Franschhoek, owned by Hanneli Rupert-Koegelenberg and run by the savvy Hein Koegelenberg, is best known for its Syrah and Pierneef Syrah-Viognier, but also has a commercially successful Cabernet Sauvignon, the current-release 2016 priced at R135 a bottle.

Grapes for this originate from Stellenbosch (50%), Franschhoek (30%) and Bot River (20%) and maturation lasted 16 months in French oak, 33% new. Alcohol is 13.5%, residual sugar 3g/l, pH 3.58 and total acidity 5.8g/l. Total production: 108 000 bottles. The nose shows rose geranium and red currant while the palate is sweet-fruited with zippy acidity and soft tannins. Clean and correct but again an easy style. Rating: 87/100.

Oh, that there was more to separate the average from the good but that’s simply not the case when it comes to wine. It is well documented that the purchasing decision is influenced by extrinsic factors such as price, variety, branding (including packaging) and distribution and consumers should always bear this in mind – if you’re looking for competitively priced, utterly reliable, widely available Cab then the likes of Nederburg The Winemasters and La Motte will serve you well enough. If, however, you are seeking something a little more soul-stirring and a little more exclusive and are prepared to pay for it, then this site can probably help you.

La Motte’s premium range is a tribute to South African artist Jacob Hendrik Pierneef (1886 – 1957), a nice touch being that each new release reflects a different piece by...

La Motte, with the savvy Hein Koegelenberg as CEO, is one operation that understands the importance of scale. While the Hanneli R red blend at R1 300 a bottle for the...