Renowned for its natural beauty, Franschhoek has attracted significant private investment in recent times and is set to discover a winemaking identity that has perhaps not been clear until now.

Though Franschhoek’s association with wine dates back to the arrival of the Huguenots in the 17th century, serious winemaking efforts in the modern era are young. In 2000, Franschhoek Vineyards was a still a co-op owned by 96 members but in 2007, it would be sold to industry heavyweight DGB, the cellar on the outskirts of the village providing much needed extra production capacity and the brand name changed to Franschhoek Cellar. During that period, the number of primary growers would drop and the number of wine cellars crushing grapes would rise. Today there are 41 cellars while total area under vineyard in the district is a relatively small 1 234ha – that’s 7.6% of all South Africa’s wine cellars relative to 1.3% of the national vineyard!

Of course, the somewhat sneering remark is often made that the best wines coming from Franschhoek cellars are made from grapes grown elsewhere, a situation of “terroir by truck” as Rob Armstrong of Haut Espoir puts it – he relates that he sells 80% of his Franschhoek-only production in the valley but worries that many visitors “come to eat great meals, stay in great places but aspire to drink wines from elsewhere”.

There’s no Franschhoek property of greater repute than Boekenhoutskloof but home vineyards currently amount to just 12ha – wines from Franschhoek include a single-variety Cab, a Semillon off old vineyards belonging to various growers, a Noble Late Harvest and the occasional Cape Bordeaux red blend known as The Journeyman. Other wines are a Syrah, for a long time from Wellington fruit but now made using grapes from Swartland plantings that Boekenhoutskloof has established, a Stellenbosch Cabernet Sauvignon and Chocolate Block, the famed blend that manages to be both big volume and high quality, all components now sourced from the Swartland.

Franschhoek is also closely associated with the production of Méthode Cap Classique, the two most prominent cellars in this regard being Colmant and Le Lude but here both supplement Franschhoek grapes with those from elsewhere.

Leeu Passant, meanwhile, is a joint venture between high-profile winemaking couple Andrea and Chris Mullineux and Indian businessman Analjit Singh – two very fine wines in the range, the first a Stellenbosch Chardonnay and the second a blend known as Dry Red incorporating grapes from a 1930s block of Franschhoek Cinsault but also including Cab and Cab Franc from Stellenbosch plus another Cinsault component from Wellington.

Even Gerard Holden, current chairman of producer body Vignerons de Franschhoek and passionate advocate of the district’s potential, sees fit to source grapes for the Chardonnay under the Holden Manz label from Stellenbosch and Chenin Blanc from various areas outside Franschhoek. 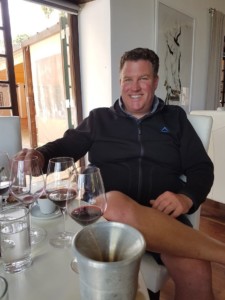 Taste through the wines of the various Franschhoek producers and you have a sense that its strengths are still to be fully determined, a very big reason for this being extreme terroir diversity, something that just about all involved agree on (see Franschhoek: At a glance). “Because growing conditions are so varied, it’s always going to be controversial as to what variety or style does best,” says Van Zyl du Toit of Allée Bleue. Interestingly Du Toit is intent on replacing his multi-regional premium white blend known as Isabeau with W.O. Franschhoek Chardonnay. “It gets hot here in summer and it helps that Chardonnay ripens early.”

As far as Clayton Reabow of Môreson is concerned, then Chardonnay must be up for consideration as one of Franschhoek’s signature grapes, this valley floor property having 15ha under vineyard, 98% of which is planted to Chardonnay, incorporating no less than 13 different clones. The well-established GlenWood, meanwhile, has 30ha under vineyard of which 70% is Chardonnay – winemaker DP Burger has enjoyed past success with his sumptuous version under the Grand Duc label. Chamonix is another property in the district that has a good reputation for the variety.

Of course, the wines made from Franschhoek’s old-vine Semillon are highly acclaimed, and with good reason, but plantings are limited and consequently it might not make sense for the district to rely on this as a signature variety. As for Sauvignon Blanc, it may be the district’s second-most planted variety but during my three-day visit taking in 15 cellars, not one producer showed me an example of this variety!

Regarding red wines, many producers are inclined to position either Cabernet Sauvignon or Cabernet Franc as strong suites but again, one wonders if there are enough stand-out examples of either for the district to capture the popular imagination.

According to this observer, it is Shiraz that seems to work best when it comes to the district’s red wines, the wines typically having a flavour profile and tannin structure that sets them apart from either Stellenbosch or Swartland – not quite as plush as the former, not quite as severe as the latter.

In general, winemaking in Franschhoek is often somewhat anachronistic. When it comes to Chardonnay, for instance, many examples are big and thick-textured as a result of their originators favouring malolactic fermentation and ambitious oak regimes. The reds, meanwhile, are often high in alcohol, the justification habitually offered being that this is the inevitable by-product of grapes picked at “full phenolic ripeness”. By way of contrast, the La Motte Shiraz 2018 has a relatively modest alcohol of 13.2% and winemaker Edmund Terblanche says it’s largely a matter of picking earlier. “Shiraz picks up body in the bottle and it’s too heavy to start with, you get an undrinkable concoction.”

It’s pretty obvious what Franschhoek needs most is time. There’s no shortage of investment capability – Allée Bleue is owned by the German Dauphin family of office furniture fame, Lynx is getting a major upgrade after its recent acquisition by Manuel Konen who has a background in hospitality recruitment, Gerard Holden of Holden Manz is a mining financier and so on… The winemaker themselves speak of a great sense of camaraderie (the regular technical tastings as organized by Marc Kent of Boekenhoutskloof are legendary). La Motte’s Terblanche, who has recently reverted to making both his Shiraz and Chardonnay from own fruit after a period of buying in grapes, sums it up well: “When the co-op held sway, everything got chucked together. Now we are starting to re-discover the potential of each farm. The more you get to know your own grapes, the more you can fine-tune.”

Sponsored: This content was paid for by the Vignerons de Franschhoek.