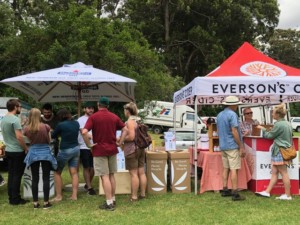 It’s the Sunday of SA’s first mindful drinking festival and co-director Sean O’Connor is wearing a crown of flowers over his sunhat. We’re on the lawns of Kirstenbosch Stone Cottages.

“The turn-out’s great,” he says, casting an eye over the stalls, tables and stage.

In this moment, O’Connor sounds a little Cape-Town-hey-shoo-wow, but he’s as pragmatic about alcohol-free drinks as the 30-plus stallholders here. He’s not anti-booze, he’s just anti-mindless drinking.

O’Connor and his co-director Barry Tyson are not alone in this. “The Mindful Drinking Movement” or “The Global Sober Revolution” is happening. With its cheery rhymes, Club Soda in the UK invites us to “change our thinking about drinking” and “cut down, stop for a bit, or quit”. Like World Without Wine, and One Year No Beer, Club Soda offers support to drinkers who want to stop overdoing it.

Non-alcoholic drinks have been around for a while and the technology and methods have improved over time. Is it possible that we’re reaching that sweet spot where laudable choices and taste overlap?

This Chardonnay-based bubbly, recently released, is superior to the J.C. Le Roux non-alcoholic sparkling wine being served a few stalls down.

The Lautus bubbles are not harsh, it’s not too sweet. It smells like an MCC and there’s a surprising complexity to the taste.

“Regular wine is very fulfilling,” Lautus owner and winemaker Reg Holder tells me. “You don’t want a life without wine. But some people can’t drink, or they don’t want to drink at certain times. Maybe they are allergic to alcohol, or maybe a doctor is on call … I made my first de-alcoholised wine when my wife was pregnant with our first child.”

Holder has been a winemaker for 15 years. For the past three years he has dedicated himself exclusively to de-alcoholised wines.

“The big wine-producers see low-alcohol or de-alcoholised wines as the stepchild in the corner. They make it because the market wants it. But it’s all I do.”

Non-alcoholic and low-alcohol wines can taste thin and watery, over-sweet or harshly chemical. And it’s impossible to recreate that warmth in the mouth, the “hit” of the alcohol on the palate and in the throat.

But alcohol has its cons too – as we are very well aware in South Africa. Alcohol is a significant factor in road accidents and domestic violence incidents. Even for moderate drinkers, alcohol can affect self-esteem, health, relationships and functionality at work and home.

Savannah’s non-alcoholic cider isn’t lip-smacking delicious, but it’s clever. There’s a hint of lemon that breaks the sweetness. On a scale of one to ten, with one being fizzy apple juice and cider being ten, Savannah manages a solid seven.

All the non-alcoholic beers at the festival are good: Heineken, Bavaria, Castle, Clausthaler and Erdinger. A fellow festival-goer tells me the market for non-alcoholic beer has been big for years, and profits have funded the equipment and fiddling necessary to improve on the early booze-free beers that tasted both metallic and watery.

The Duchess Virgin Gin & Tonic brand is notable by its absence. This bottled, non-alcoholic cocktail was launched in 2016 and brought home two international Zenith Innober Awards from Prague last year – one for Best Adult Drink and one for Best New Drink Concept.

Interestingly, two of the most popular stalls at the festival are for beverages that don’t emulate alcoholic drinks.

In many ways, Jean-Baptiste Cristini’s Symmetry tonics out-class the looky-likey beverages. Granted, Cristini is charming and the stall is beautifully styled, but his fynbos-inspired concentrates are delicious.

The Symmetry Tonic Essence stall is surrounded, two people deep, at all times over the lunch period. Cristini passes around sprigs of rose pelargonium, buchu and kapokbos as he talks and pours, talks and pours.

He has three tonic concentrates – floral, spice and citrus. Each is as fragrant as the last. These are not Indian Tonic waters, but they go very well with vodka, gin – or grapefruit or cucumber juice, according to Cristini. We drink them on their own, with soda and ice. All three are complex and evocative. The savoury, tart and bitter flavours are elegant and well-balanced.

“They (the tonics) go really well with food,” Cristini says. “Foodies love them. It used to be that foodies only drank wine, — and quantities of it – but that’s changing now.”

The other stall attracting attention is Goodleaf, a CBD (cannabis)-infused sparkling water. The sparkling water – with flavours like aloe & rose or mango & ginger – is a kind of supplement offering a 4mg, non-intoxicating “dose” of CBD.

A word on terminology: If a drink has less than 0,05% alcohol, it can be classed “alcohol free”. A drink with 0,3% alcohol is “non-alcoholic”. But O’Conner says ripe bananas and raw pizza dough contain 0,3% alcohol.

Leopard’s Leap produces a de-alcoholised wine it advertises as “vegan”. The stallholder tells me some “regular” wines contain egg whites (used as a fining agent).

If consumers decide to cut back on the booze, it’s surely a matter of preference whether to switch to soft drinks or non-alcoholics. O’Connor believes non-alcoholic drinks offer a more satisfying alternative. If the quality of imitations continues to improve, I’d say he’s right.