Speaking at the third annual workshop run by official producer body Hallo Merlot earlier this week,  Luca Rettondini, winemaker at Le Macchiole in Bolgheri, Italy, openly admitted that he dilutes the must of his Messorio Merlot from a potential alcohol of between 16 to 17% down to 14.5% before maturation for 18 months in 100% new oak – this a wine with an aggregated critic score of 94/100 and an average retail price of $189 a bottle (the equivalent of approximately R2 850) according to Wine-searcher.com. 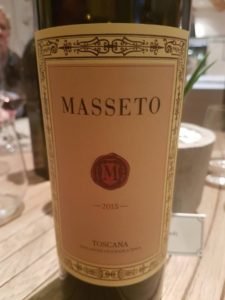 Later at the annual Merlot dinner hosted by Rupert & Rothschild Vignernons, one of the wines served was the Ornellaia Masseto 2015 from Tuscany, vinfication involving 200% new oak, aggregated critic score for previous vintages 95/100 and current average price being $757 (approximately R11 500) a bottle.

Needless to say, both wines were incredibly concentrated yet soft and round and made the likes of Laibach Claypot 2016 (R320 a bottle) and Shannon Mount Bullet 2016 (and R450 a bottle), top wines in our recently released Merlot Report look much more herbal in terms of aromatics and much slighter in terms of body. It caused me to wonder: Is our collective aesthetic appropriate if we are to take on the likes of Messorio and Masseto? Do we even have the necessary growing conditions and fruit material to come close?

Earlier in the week, Chris and Andrea Mullineux showed the 2017 vintage of both the Leeu Passant Stellenbosch Chardonnay (R650 a bottle) and Dry Red (R1 000) next to the previous 2015 and 2016 renditions of these wines. It was striking to note that while the Stellenbosch Chardonnay has pretty much remained stylistically consistent from year to year (alcohol in the case of both 2015 and 2016 at 14% and dropping to 13.5% in 2017), the Dry Red appears to have slowly been beefed up.

Always a blend of Cabernet Sauvignon, Cabernet Franc and Cinsault, the portion of Cab has gone from 36% in 2015, to 37.5% in 2016 and now sits at 56% in 2017 while alcohol has gone from 13.5% to 14% to 14.5%. Andrea Mullineux insists that these alterations are purely due to vintage variation, and of course the drought was a massive factor over the years in question, but you do wonder, even if only subconsciously, there’s a realization by Team Mullineux that when it comes to the top-end of the market for red wines, most consumers prefer a more embellished wine.

The other point that could be made is that the benchmark for the very finest (and most expensive) white wine in the world is, of course, Burgundy and South Africa’s best Chardonnay and to some extent Chenin Blanc bears much more ready comparison (in basic terms) to this in terms of stylistics than many of our reds do to the Super Tuscans, the cult wines of Bordeaux or Napa. Finally, South African producers might also have to admit that endemic leaf-roll virus compromises late-ripening red varieties more than it does whites.

Laibach, the Simonsberg property that was purchased by neighbouring Kanonkop in January this year, will in future be known as Ladybird Vineyards. The new name comes into immediate effect, with...