Do expectations influence outcomes when it comes to wine ratings? Dana Buys, co-owner of Vrede en Lust, thinks so, arguing for instance that were you to assemble a group of professional tasters and tell them that they were about to taste a line-up of Pinot from New Zealand rather than South Africa, they would necessarily be predisposed to score higher. 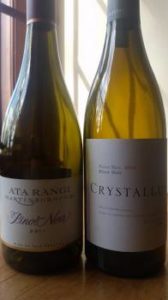 To investigate this, a comparative tasting of five top New Zealand examples alongside 13 from South Africa and one from Santa Barbera.

So the Kiwi stuff did indeed emerge ahead of the South African wines but not by much. What set the former apart was that they tended to show a broader spectrum of both aroma and flavour. Whereas the South African wines exhibited predominantly red fruit, the New Zealand wines had both red and black fruit. Interestingly enough, Finlayson and Marshall were not convinced that black fruit is part of how Pinot Noir ideally expresses itself but I am much more partial to it.

Associated with those black fruit flavours on the New Zealand wines were also relatively high alcohol levels – 13.9% on the Marie Zelie Reserve, 13.8% on the Ata Rangi, 14.5% on the Neudorf, 14% on the Mud House and 14% on the Akarua.

The South African wines, taken as a whole, tended to be quite a bit more slight. If local Pinot was overdone not so long ago, it currently appears that winemakers are in danger of having over-refining their offerings, the result being wines which are pretty but ultimately insubstantial. The New Zealand wines just about all seemed to have a gravitas that still eludes local producers.

Elgin tends to claim Pinot Noir as its signature red grape variety but the Syrah under the Solace label from the Iona team is smart, the 2017 particularly so. Grapes...