SA Wine History: A Wine Even Better than Constantia

In my last column, I had a look at some of the Cape’s best wines after Constantia. But did you know there was a wine regarded as (and I quote) ‘even better than the sweet Constantia that once gained world fame’?

That quote comes from A Taste of South-Easter by Lawrence G Green, a noted recorder of quirky historic facts who was sharing the very serious sentiments expressed in 300 Years of Cape Wine by physician, poet and playwright C Louis Leipoldt, who wrote: ‘Among connoisseurs, such as Baron Von Babo and Dr Hahn, it was always reckoned one of the best wines ever made at the Cape, in some respects superior even to the original Constantia.’

Trained at Austria’s Viticultural School at Klosterneuburg, Baron Carl von Babo was appointed as the Cape Colony’s viticulturist and inspector of grapevines in 1884. A chemistry professor from Halle, Germany, Paul Daniel Hahn passionately sought to improve viticulture in the Cape after his arrival in 1875. Having served on the Vine Diseases Commission of 1880, it was Hahn who urged the Cape government to acquire and develop Groot Constantia as a model wine farm in 1885, with Von Babo in charge, so if these two learned gentlemen rated a wine more highly than legendary Constantia, they can’t have done so lightly.

To whet your appetite some more, here’s what else Leipoldt had to say about this ‘wine of unsurpassed excellence’:

‘It was a clean, sparkling, delicious, fine, magnificently harmonious, not too saccharine wine, grandly individual, so that although some saw or tasted in it a fancied similarity to a superb Sauternes and others again likened it to a liqueur Furmint [Tokaji] wine, its characteristics were definitely its own, and comparison was altogether pointless…

‘[It was] a wine sui-generis, a deep amber-coloured fluid with a fragrance of sorrel and muscat combined into something peculiarly its own, harmonious and velvety on the palate, showing that it had little tannin and a fair amount of pectin substance, a highly vinous aroma, with an after-taste that was faintly reminiscent of many fruits but characteristic of none, and a paucity of free acid that was as surprising as it was pleasant…

‘It was a wine of remarkably low alcoholic content: Dr Hahn’s analysis of various bottle shows slight differences, varying between 9.05 and 9.68 vol. per cent.

‘It was a delicious tasting wine and so much in demand that there was never enough of it, for the vineyard, which was planted among pebbles, was comparatively small and the yield was not large. It was a Green Grape wine, blended with some other must, but its composition was a secret, never revealed.’

This mystery semillon-based blend was fondly known as Oom Koos Mosterdpotjie Wyn, although it seems unlikely that this would have been the name used by its two most famous fans, Germany’s ‘iron chancellor’ Otto von Bismarck and short-lived emperor Frederick III (Queen Victoria’s son-in-law), who reigned for only 99 days before dying of laryngeal cancer on 15 June 1888.

‘With all the classical vintages of Europe at his beck and call, [Oom Koos Mosterdpotjie Wyn] was the only wine that the Emperor would touch during his last illness – still asking for his lips to be wetted with it when the final operation on his throat had left him no longer able to swallow,’ wrote C de Bosdari in Wines of the Cape.

It seems Leipoldt confirmed this fact with Dr Mark Hovell, the senior surgeon who had assisted the famed British physician and laryngology pioneer, Sir Morell Mackenzie, in attending to (and operating on) the emperor. Leipoldt was told it was ‘a fragrant Cape wine that had been difficult to procure’ and was ‘exclusively used’ by the royal patient. ‘His Majesty wetted his lips with it very frequently, but could hardly swallow,’ said Hovell, quoted by Leipoldt. ‘For some reason, he preferred the Cape wine to the other fine wines.’

Apparently, this feedback was communicated ‘through the proper channels’ to Oom Koos Mosterdpotjie himself: Jacobus Francois Hugo (1816-1893), a farmer in the Worcester district, whose nickname (meaning ‘little mustard pot’) apparently reflected his very short stature. A descendant of the French Huguenot Daniel Hugot from Champagne (also on record as having been unusually short, and a blacksmith by trade), Oom Koos owned the Breedekloof farm then known as Bosjemansvallei/Boesmansvlei.

According to Leipoldt, this was ‘a peculiarly favoured spot where the vines needed no irrigation whatever’ – and it seems Koos Hugo was ahead of his time, harvesting grapes in several passes, laying them out on stretched cowhides to cool down overnight (all rotten berries removed), and pressing them very early the following morning (between 3am and 7am). 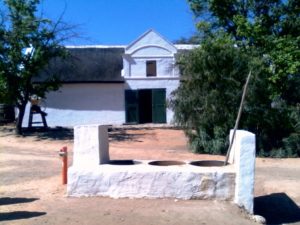 Built in 1830, Oom Koos’s old cellar is apparently still standing on the farm now known as Wilgevlei, located on the R43 between Worcester and Wolseley, next to Botha Cellar, the giant co-operative to which it still supplies grapes. In fact, Wilgevlei is one of Botha Cellar’s five ‘priority farms’ from a biodiversity point of view, on account of its ‘pristine mountain fynbos, covered for the most part by the vulnerable Breede Shale Fynbos’.

What’s more, Wilgevlei is still farmed by a Hugo (albeit not a direct descendant of Oom Koos): Viljoen Hugo, whose brother Pieter serves on the board of directors at Botha Cellar. A former KWV director and Vinpro chairman, Pieter Hugo has over 40 years of experience in the wine industry and is quite possibly the only living person to have tasted Oom Koos Mosterdpotjie Wyn. ‘When I was studying at Stellenbosch University, I tasted a bottle with my professor,’ he recalls. ‘By then the wine was dark and syrupy, almost like moskonfyt, and we couldn’t make out what it had been, other than sweet and full-bodied. An exceptional wine.’

Leipoldt’s tasting notes on the ‘luscious, amber-coloured wine’ were also based on personal experience. In 1927, he had tasted a bottle of 1864 (recorked in 1888) that ‘still had its smooth, velvety taste, although its sweetness had faded almost into nothing’. It was ‘much darker’ than the ‘graceful and distinctive’ wine he recalled from his youth, when he had accompanied his maternal grandfather, the Reverend Louis F Esselen, a Rhenish missionary in Worcester, to buy a half-aum (just over 70 litres) of the wine. ‘[It] was in great demand as a nagmaal or communion wine,’ wrote Leipoldt. ‘There was very little of it, and few of [Koos Hugo’s] friends were privileged to get it.’

One of these ‘friends’ was Leipoldt’s uncle, Ewald Esselen, who travelled to Europe as secretary of the Boer delegation under Paul Kruger in 1884. After finalising the London Convention, which ended British suzerainty of the duly renamed South African Republic, the delegation toured mainland Europe, eventually meeting with Kaiser Wilhelm I of Germany (Frederick III’s father) and Bismarck.

Turning 70 the following year, Bismarck was presented with a dozen bottles of Oom Koos Mosterdpotjie Wyn and – ‘not to be outdone in generosity’ – reciprocated with three bottles of 1846 Steinberger from historic Kloster Eberbach in the Rheingau. ‘The whole [123-gallon vintage] had been bought at the Eberbach sale in September 1858 by the King of Hanover for 6,000 florins or 120 pounds,’ wrote Leipoldt.

Apparently, Dr Hahn was given a taste of this prized and virtually unattainable German riesling. His verdict? Not as good as the Cape wine…