SA wine history: On education, alcohol and the role of sick comforters

Since the extension of South Africa’s lockdown, there’s apparently been a spike not only in illicit activity concerning the sale, production and transportation of liquor (with police collusion in a few cases) but also in Google searches for ‘how to make alcohol at home’.

That TikTok video of the mom pouring wine into her breakfast cereal isn’t very funny anymore, and neither is the joke that more than a few friends in less strict lockdown situations overseas have sent me: ‘It may take a village to raise a child but I swear it’s gonna take a vineyard to homeschool one.’

(Two, in my case, so I’m thankful that my wine rack isn’t completely depleted yet…).

As it turns out, the combination of education and alcohol is nothing new. Exactly 362 years ago, on 17 April 1658, the first school was established at the Cape of Good Hope. Its attendees were not the children of white settlers, as you might expect, but slaves from Angola who’d arrived three weeks previously aboard the Amersfoort, a merchant vessel that had intercepted a Portuguese slaver, quite by chance, and relieved it of half its ‘cargo’, comprising 500 male and female slaves.

Of the 250 slaves captured, only 174 survived the journey to the Cape, of whom the majority were said to be ‘young boys and girls, who will be of little use for the next 4 or 5 years’. They would need to be kept busy somehow…

The man appointed to provide them with some basic Christian education (or at least ‘bring these people under proper discipline, signs of which are already apparent’) was Pieter van der Stael of Rotterdam, who happened to be Commander Jan van Riebeeck’s brother-in-law (married to his sister Geertruyd). ‘That he may encourage the slaves to attend and hear or learn the Christian prayers, it is ordered that everyone shall receive after school a glass of brandy and two inches of tobacco each,’ recorded Van Riebeeck in his Journal.

So there you have it: brandy and tobacco for schoolchildren!

Van der Stael was deemed to be the right man for this teaching job because he could read Dutch ‘correctly’ in his role as sieketrooster or sick comforter. What did this role entail, I wondered, and might it be worth resurrecting during these anxious times? 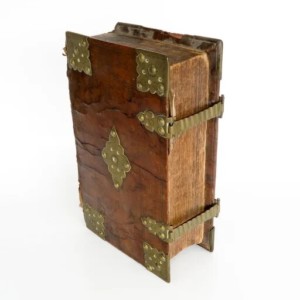 Although a sieketrooster’s duties included assisting with minor medical procedures, it seems his main responsibilities were teaching, admonishing, and comforting the sick and infirm from God’s Holy Word. In other words, he was not so much a qualified nurse as a person appointed by the Dutch East India Company (rather than the Church) to read from the Bible. This he was required to do not only every Sunday before the start of formal church services, but also ‘at every opportunity…to instruct the ignorant diligently in the faith, to earnestly exhort sinners to repentance and to cease from sin, to warn the faithful through the presentation of the frightful judgements of God concerning destruction, to oppose through every possible and appropriate opportunity swearing and the taking of God’s name in vain, and any form of immoral language, and to comfort and strengthen those who for whatever reason were lacking in faith or discouraged’.

However ‘comforting’ Van der Stael may have been, on 12 March 1661 he received a pay increase for being ‘advantageously engaged in instructing slaves and Hottentoos [sic] in the Dutch language and the Christian religion’ – and after his departure for Batavia in 1663, he was again praised for the ‘laudable commencement’ he had made in bringing ‘the true knowledge of God’ to these children.

His replacement as sieketrooster and teacher was Ernestus Back from Amsterdam, who on 30 November 1663 was said to be showing ‘great diligence in teaching both Dutch and black children to read and learn their catechism’. (His class comprised 12 white colonist children, four young slaves and one Khoikhoi child.) Alas, his dismissal came little over a year later, on 7 February 1665, when the incumbent commander at the Cape, Zacharias Wagenaer, reported to his Dutch East India Company superiors that Back had fallen into a state of drunkenness and licentious living.

‘On a certain Sunday, in full congregation, while he was conducting Communion Service, he was found to be so drunk that many of his congregation were ashamed and distressed,’ wrote Wagenaer. ‘Although we have threatened him frequently and severely with one and another punishment, and thus endeavoured to draw him away from his evil ways, he has ignored all our pleas, and has even gone in the company of youths, shouting and playing tricks, sometimes even fighting. He has gradually become so bad that it has become unbearable to see and hear daily the name of the All Highest preached, scandalously and blasphemously, in the midst of this wild and uncivilised congregation, by so wild and incorrigible a person… Wherefore we are despatching him and his family with this ship.’

I suppose it all goes to show that there are no easy answers when it comes to alcohol use or abuse, but prohibitionist-style bans don’t ever seem to have worked in the longer term. Let’s hope for good news later this week, following the announcement that South Africa’s National Command Council will be meeting to consider ‘submissions from various sections, including the liquor industry’.