Botha is a fairly common surname in South Africa, with examples in the wine industry (off the top of my head) including Dawie Botha (Anthonij Rupert), RJ Botha (Kleine Zalze), Stuart Botha (Tokara) and the eighth-generation Bothas of Stettyn Cellar.

Most Bothas, it seems, are descended from Friedrich Both (Boot, Bota, Botha) who was born on 4 March 1653 in Wangenheim, Gotha, Thuringia, Germany. After joining the Dutch East India Company (VOC), he arrived at the Cape as a soldier in 1678, becoming a vrijburgher (free citizen) five years later. At first, he worked as a farmhand at various farms (‘landbouer bij den een en den ander geweest te sijn’), most notably at the Stellenbosch farm allocated to Jan Cornelisz van Oudbeijerland in 1683, formally granted in 1689, later named Libertas. Here Botha farmed for a quarter of the profits (‘oom voor een vierde part met hem te zaaijen en te bouwen’).

As it turned out, however, profits weren’t all that Botha shared with Cornelisz.

In 1689, the year that Botha started laying out a 64-morgen farm of his own (namely Zandberg, formally granted in 1694, later renamed Scholtzenhof, today home to Ken Forrester Vineyards), two women came forward and swore under oath that the wife of Jan Cornelisz, Maria Kickers, had told them while pregnant with her second child (Willem, baptised 2 September 1687) that Botha was the father, while Ferdinandùs Appel had fathered her first child (Theunis, baptised 15 April 1686).

Nonetheless, Maria Kickers and Jan Cornelisz went on to baptise at least four more children together (Catrijna on 7 May 1690, Jacobus on 24 August 1692, Maria on 1 May 1695 and Cornelia on 6 January 1697) before their troubled marriage came under the spotlight again. The last straw seems to have been when she ‘asked’ him to work a piece of land and he refused, to which she reportedly responded: ‘You will do whatever I want, you will go through a fire for me, and you will kiss my feet if I want it…because I regard you as less than a knecht, yes less than a Hottentot, yes less than a dog.’

Cornelisz duly asked for a divorce on 22 January 1700, stating for the record that Kickers not only shamed him verbally and physically (‘met slaan en stooten’) but was also in an adulterous relationship with Botha. She then testified that all of her children had indeed been fathered by Botha, but with her husband’s encouragement (‘haren man haar daar toe selfs aanleijding soude hebben gegeeven’) because he was impotent (‘onbequaamd’).

Cornelisz denied this but accepted that her ‘confession’ was to his advantage, freeing him of his marital vows and permitting him to marry another. No such permission was forthcoming for Kickers, however, despite her declaration that she and Botha had sworn troth to each other, just as though they were truly married to each other, and had lived together for several years as man and wife, producing eight children (including another son named Johannes, for whom I have not yet found a baptism record, and a daughter named Anna, baptised between 19 March and 9 April 1702: the day is not recorded but she is clearly named as the ‘dogter van Frederik Both, d’moeder Maria Kickers’).

The Cape Muster Roll of 1701 lists Kickers living in Stellenbosch, supposedly separately from Botha who is listed along with eight children, also in Stellenbosch. In 1706, however, they were found guilty not only of co-habiting but also of illegal cattle possession and an assault on Claas Das (the Dutch name for Khaik Ana Ma Koukoa, the former Khoi interpreter who had succeeded Autshumao aka Herry the Strandloper as Goringhaicona chieftain). They were banished separately to Mauritius for 10 years and fined 100 Rixdollars, though it is unclear whether the banishment took place (the VOC withdrew from its Mauritius settlement in 1707 and certainly Kickers’ name appears in the 1707 Muster Roll, with Botha’s name reappearing in the Opgaafrol of 1709, the year in which his farm, Zandberg, was transferred to the Widow Elberts, Aletta Ter Meulen).

After Cornelisz’s death in 1713, Botha and Kickers were finally free to marry, which they did on 21 June 1714, after which all of Kickers’ children were recognised as Bothas.

Theunis, the eldest son, seems to have enjoyed a close relationship with Botha. Father-and-son bonding time even included the odd raid on Khoi tribesmen. In his Caput Bonae Spei Hodiernum, published in 1719, the German astronomer Peter Kolb (who lived at the Cape from 1705 until 1713) included the names of Friderik and Theunis Bota [sic] in a party of ‘traders’ led by Gerrit Jansz van Deventer by order of the governor.

‘They would better have deserved the name of gangsters and highwaymen than that of traders,’ wrote Kolb. ‘For they arrived as friends but behaved themselves as enemies. Instead of the necessary and honest payment they grasped their muskets and fired on them. They ran their sword through everyone who was in their way. Whole kraals or Hottentot villages were pillaged, and those who could not flee had to hide themselves here and there and seek safety in the face of the cruelty of their hostile friends. My heart burns when I just think of it.’

If you believe in karma, perhaps Van Deventer got what he deserved. Either he or his wife Ariaantje Jacobs carried the gene for Variegate Porphyria, with an extensive genealogical investigation by Geoffrey Dean and Hubert Barnes concluding that the strain found in South Africa is genetically identical in most patients with the condition, and that they all descend from this couple.

As for the Bothas, modern DNA tests conducted by Jaco M Greeff and J Christoff Erasmus at the University of Pretoria have borne out the claim that was made about Maria Kickers and Ferdinandùs Appel, with direct patrilineal descendants of Theunis testing positive for the same Y-chromosome haplotype as direct patrilineal descendants of Ferdinandùs Appel. A sample taken from 15 Botha men showed that seven had an ‘Appel’ Y chromosome, suggesting that almost half of today’s Bothas are actually, genetically, Appels.

What is known for sure is that Pik Botha, South Africa’s foreign minister during the last years of Apartheid, was indeed a direct descendant of Friedrich Both. The prime minister under whom he served, PW Botha, was not. 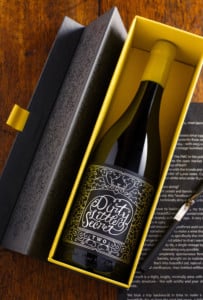 As for Friedrich Botha, I’m sure he knew Maria Kickers’ dirty little secret – that he wasn’t Theunis Botha’s father any more than Jan Cornelisz was – but it’s a delicious twist in the history of the farm that is now home to Ken Forrester Vineyards, with a Dirty Little Secret of its own, namely its Chenin Blanc made from old Piekenierskloof vines that is ‘a natural wine in every sense…unfiltered, unrefined, just a Dirty Little Secret – naturally!’

Unfiltered and unrefined, just like some of the characters who laid the foundations of our industry, whose stories are still waiting to be told…