Before his departure from the Cape on 23 April 1708, dismissed governor Willem Adriaan van der Stel oversaw the grape harvest at his showcase estate Vergelegen one last time. Total production amounted to 56 leaguers (about 32,000 litres) of wine regarded as ‘particularly good’.

It’s tempting to imagine the heights Cape wine might have reached, starting three centuries ago, had WA van der Stel been allowed to stay on, making wine at Vergelegen, while his father Simon simultaneously built the reputation of Constantia.

Alas, the directors of the Dutch East India Company (VOC) had decided that Vergelegen must be subdivided and sold, and the man tasked with carrying out these instructions was the new Cape governor, Louis van Assenburg.

Van Assenburg would quickly prove very popular among the vrijburghers, laying on firework displays, puppet shows and dog or bull fights, so it’s perhaps not entirely surprising that Vergelegen ‘for various reasons’ remained unsold and that a plan needed to be made on 19 December 1708 regarding the harvest of ‘a large quantity of grapes’.

As pressing these grapes was deemed ‘not fit for the Company or convenient under the circumstances’, it was decided to draw up a contract with four men, namely Hendrik Doncker, Hendrick Bouman, Willem ten Damme and Michiel Ley. ‘They shall with their own men press all the grapes on the farm Vergelegen, the Company likewise giving ten slaves for the purpose, and looking after the vineyard. The pressing to take place in the presence of two commissioners, who are carefully to write down the quantity and the names or kinds of wines pressed. The contractors to use their own material and casks for the work, the Company to supply whatever fustage may be required additionally.’

It was agreed that the contractors could keep half of the wine produced, delivering the rest to the Company: ‘Each side to receive an equal quantity of white Muscadel, red Muscadel, Steen and Groendruif.’

Out of these four contractors, I think it’s worth devoting a paragraph or three to Michiel Ley, albeit not so much for his wine as for ‘inventing’ what we know as biltong.

One of WA van der Stel’s fiercest adversaries, Henning Huysing, had accumulated great wealth through the meat pacht (for more on the VOC’s pacht or monopoly system, and alcohol retail in particular, see here). Following Van Assenburg’s arrival, Huysing had a contract to supply half of the Company’s meat requirements, with the remaining half divided between burgher councillor Claas Hendriksz Diepenauw and Michiel Ley, a supporter of Van der Stel who had arrived in 1696 from Basel, Switzerland, as a soldier but was soon contracted as Company’s Butcher.

At a Broad Council Meeting on 28 March 1709, when the necessity of supplying ships with dried or smoked meat was reiterated, it was noted that meat salted eight days previously by Huysing had been inspected. ‘The lean parts were found good, but the thick parts already spoiling.’ 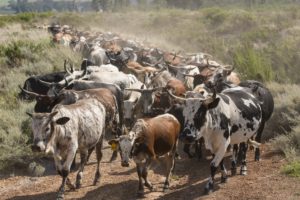 If Vergelegen had boasted its herd of free-range Nguni cattle back in 1709, just imagine the biltong that master butcher Michiel Ley could have made while temporarily overseeing the wine harvest.

Huysing was therefore ordered to adopt Ley’s recipe of ‘double salting’, which required that ‘the meat should first lie some days in the brine to draw out the blood, & after that be placed in new salt’. The Company would supply the pepper. (As for the meat already salted by Huysing? ‘The good portions to be distributed among the crews, & the tainted ones [ed: no surprises here] among the slaves…’)

On 30 April 1709, it was decided to postpone the sale of Vergelegen until October, with Van der Stel’s agents (including Ley) having argued that the ploughing season was at hand and, moreover, a price for the buildings had not yet been agreed upon. Until then, it was decided that the vines should be pruned by the Company’s slaves, and that ‘proper and timely notice’ should be given of the sale.

On 20 August 1709, the buildings on Vergelegen were valued at 4,400 Rixdollars in total (including the homestead worth 600 Rixdollars, the slave house worth 400 Rixdollars and the press house worth 700 Rixdollars). However, it was resolved to pay Van der Stel’s agents only 3,000 Rixdollars (and they were clearly in no position to negotiate).

On 31 October 1709, the four ‘allotments’ of Vergelegen were sold, with the north-west portion known today as Lourensford going to Jacobus van der Heyden, the south-west portion now known as Morgenster purchased by Jacques Malan, a French Huguenot, and the southern portion sold to Catharina Harmans, the widow of Gerrit Cloete, who duly called it Cloetenburg (we now call it Somerset West).

The most significant allotment, which included the buildings, vines and plantations and therefore retained the name Vergelegen, was sold to Barend Gildenhausen (Geldenhuys) for 9,500 guilders (3,800 Rixdollars).

To put this in perspective, however, Gildenhausen’s father, Albert, owned the Liesbeeck farm Roodenburg, which was valued at 16,000 guilders in 1712, firstly suggesting that Vergelegen was not quite as palatial as had been alleged by Van der Stel’s adversaries, and secondly lending weight to my argument that the Liesbeeck Valley (with what is now the suburb of Rondebosch at its core) was a far more important centre of winegrowing than has generally been acknowledged.

Theal, George McCall: History and Ethnography of Africa South of the Zambesi, from the Settlement of the Portuguese at Sofala in September 1505 to the Conquest of the Cape Colony by the British in September 1795, Cambridge University Press, 2010