SA Wine History: What were the best wines after Constantia?

In my last column, which looked at Napoleon’s fondness for vin de Constance (Constantia wine), I referred to pioneering wine critic André Jullien’s encyclopaedic Topographie de Tous les Vignobles Connus (first published in 1816) which described the wines coming from Groot and Hoop op Constantia as ‘some of the best liqueur wines in the world’.

At the end of his chapter on Africa, Jullien classified the red and white wines of Constantia as first class; the Cape muscats and ‘red wines called Rota from the district of Stellenbosch’ as second class; the white wines of ‘Perle’, ‘Dragenstein’ and Stellenbosch as fourth class; and the wines of (wait for it) Robben Island, Fayoum in Egypt, and Abyssinia as fifth class.

In more recent times, grape growing on Robben Island was undertaken on a small scale by political prisoners, with actual winegrowing resurrected by Philip Jonker of Robertson estate Weltevrede (a feel-good story I covered for The World of Fine Wine in 2014). Exactly what Rota may have been is worthy of further investigation (any ideas, anyone?) but Jullien was remarkably specific regarding the second-class Cape muscats: ‘The most esteemed crus are those of Becker and Hendrick.’

I immediately thought Becker must be the man whose farm Napoleon’s secretary, the Comte De Las Cases, was banished to in late 1816 after being caught smuggling letters from St Helena to Europe – Altydgedacht in Durbanville, then still known as De Tijgerbergen.

In the Cape section of his Mémorial, Las Cases wrote that he had been ‘removed to the very extremity of the civilised world’ but was nonetheless treated with ‘more than kindness’ by Franciscus Josephus Becker (‘not my jailor, but merely my host’). He was moreover delighted to find that most locals admired the exiled emperor: ‘The most victorious game cock in the neighbourhood was called Napoleon! The swiftest racehorse was Napoleon! The most invincible bull!’ 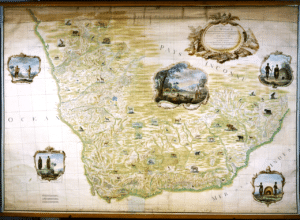 Map of southern Africa prepared for Louis XVI of France (a fan of Constantia wine) by Jean-Benjamin de Laborde based on Francois le Vaillant’s detailed descriptions of his African travels, published in 1790. Measuring 9ft x 6ft, the map is in the Bibliothèque Nationale de France, Paris. (Source: Wikimedia)

Rather disappointingly, however, the wines so esteemed by Jullien can’t have been produced at Altydgedacht because Becker only acquired the property in 1816 (the same year the first edition of Topographie was published). Even more disappointingly, further digging reveals that Jullien merely copied (almost verbatim) what French explorer and ornithologist Francois le Vaillant had written all the way back in 1790, in his Voyage dans l’Intérieur de l’Afrique par le Cap de Bonne Esperance dans les années 1780, 81, 82, 83, 84 & 85 (a decade before this particular Becker’s arrival from Germany).

The digging continues, needless to say, to establish precisely which Becker and Hendrick may have been making decent wine in the early 1780s. Meanwhile, I’m also trying to find out more about another highly regarded wine from the early 1800s, named ‘Diamond’ after the farm where it was made.

According to the Imperial Russian vice-admiral Vasily Mikhailovich Golovnin, who was detained at the Cape for a year before managing to escape in May 1809, ‘Diamond’ was the best imitation of Constantia (which, incidentally, he noted was made ‘at only two places, the one next to the other… One is called Groot Constantia and belongs to a Mr Cloete; the other belonging to Mr Collin and is called Klein Constantia’ [note: not the Klein Constantia we know today but Hoop op Constantia]).

Regarding the Cape’s various ‘imitations’ of Constantia, Golovnin wrote: ‘The best is the one called after the name of the farm where it is made, Diamant. It is not much inferior to the Constantia wine. It has a very agreeable sweet taste, with some strength, and is light pink in colour.’

There’s a chance this wine came from Paarl Diamant, now an equestrian and guest farm located north-west of Paarl Mountain (on the R44 to the north of Black Pearl Wines) but I think it’s more likely to have come from Diamant Estate, now a popular wedding venue in the shadow of the Taal Monument, just off the Suid-Agter-Paarl Road.

The original Diamant Estate was formally granted in 1693 to Coenraad Cloete (whose grandson would turn out to be Hendrik Cloete of Groot Constantia fame). Its immediate neighbours to the west were Bloemkool and De Leeuwen Jagt – the properties we know today as Fairview and Spice Route, both owned by the visionary Charles Back.

Just imagine what Golovnin and other early travellers would think if they visited the ‘destination of dreams’ that is Spice Route today! Not to mention Fairview with its cheesery, now producing more than 50 artisanal products, and its very many fine wines (including those in the ‘esoteric, age-worthy’ Bloemcool range, which embraces the farm’s heritage).

If Golovnin did visit, I suspect the closest he might get to his sweet, fairly strong, pink ‘Diamond’ wine would come from Fairview’s La Capra range – the fortified Red Muscadel sourced from the upper slopes of Paarl Mountain, with the 2017 described as follows: ‘Peach pink colour in the glass. Litchi, rose and honey aromas with well-balanced sweetness and candied orange peel flavours on the finish.’

Golovnin, VM: Detained in Simon’s Bay: The Story of the Detention of the Imperial Russian Sloop Diana from April 1808 to May 1809 (Friends of the South African Library, Cape Town, 1964)

Las Cases, Emmanuel Auguste Dieudonne, comte de: My residence at the Cape, being an extract from volume IV of Mémorial de Sainte Hélène: Journal of the private life and conversations of the Emperor Napoleon at Saint Helena, with introduction and notes by OH Spohr (AA Balkema, Cape Town, 1970)