With the 2010 WINE magazine Shiraz Challenge set to take place next week, panel member James Pietersen and I decided to do a calibration exercise. We also invited Rianie Strydom, winemaker responsible for the Dombeya and Haskell labels, who agreed to include some of her pretty smart Shiraz that she has made recently. 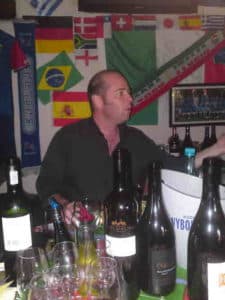 We tasted blind with scoring done according to the 20-point system and here is how the wines ranked (average arithmetic scores in brackets):

It was disconcerting to see Diemersdal 2007, which was last year’s competition winner, and Kango 2008, the runner-up, so far off the pace. The Diemersdal now comes across as fruit-driven, appealing yet not very complex while the Kango is light-bodied with overt herbal and savoury notes.  Both remain eminently approachable but aren’t very substantial.

Did these wines rated higher than they should have last year? “We were fixated with rewarding wines of elegance rather than those of power and weight. Drinkability and elegance sit very close to each other but they aren’t the same thing,” observed Pietersen.

So a timely reminder to tolerate wines with more intense fruit concentration. In addition, wood tannins on a young wine are not necessarily bad, as long as the fruit is sufficient to carry them.

What troubled me slightly about both the Dombeya and Haskell was that both showed marked sweetness. Strydom confirmed the former as having a relatively high residual sugar of 4.5 g/l and let on that this was achieved by the addition of grape juice concentrate. “Sugar has its place in a commercial world,” she says. The Haskell, meanwhile, has a residual sugar of 3.9g/l, with Strydom  explaining that the wine was naturally fermented, a process that typically leaves the end-product less dry than if it had been inoculated.  The wine’s credentials are well established, however (gold at the Old Mutual Trophy Wine Show 2009,  5 Stars in Platter’s 2010, best in class, best red wine and  best wine overall at the Tri Nations Wine Challenge 2009), and you can still buy it from the winery at R400 a bottle.

Using whole bunches (not destemming) in the fermentation as a means of achieving extra interest has been fashionable for a while now, especially for Syrah. It was therefore curious to...