Tamlyn Currin: Interview with Callan Williams of The Garajeest 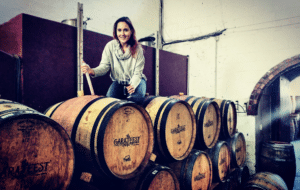 Callan Williams of The Garajeest.

The young woman opposite me, with extraordinary wide-open, pyrite-coloured eyes rimmed in thick dark kohl, took a little leather bomber jacket off, and began to talk about ballet. Years of it. Thousands of hours of point shoes and lessons and leotards under school uniforms and exams from the age of four. There were French classes to learn the fouetté from the pas de chat, daily after-school practice sessions at the South African Ballet Theatre and dreams of joining the Alvin Ailey African-American contemporary dance company. ‘I didn’t have much of a life’, she admits.

But in her final year of school, on a trip to Cape Town to audition for the Cape Academy of Performing Arts, Callan Williams had a revelation: there was no money in dancing.

Except her money-making plan wasn’t wine. This teenage ballet dancer, born in a tiny mining village in Zimbabwe, educated at one of the most prestigious private girls’ schools in South Africa and fed a steady childhood diet of Bruce Springsteen, Bob Dylan and The Rolling Stones, decided to enrol herself in Africa’s oldest, male-dominated, Afrikaans agricultural college, Elsenburg, to study cattle farming. She imagined she’d become, she told me, a kind of Lara Croft.

In her class she was the only English person, one of just three girls. But with the same single-minded dedication that she’d pursued ballet, she threw herself at farming. She struggled through two years of lectures in Afrikaans until she no longer needed the English translation notes. Having never drunk as a professional dancer, she learnt to drink and sokkie with the boys – so much pap sak that ‘I don’t even remember my first year!’, her eyebrows lift in half jest, ‘how did I even pass?!’ But pass she did, emerging four years later waving a B Agric with Cellar Technology degree. At some point, cattle farming had given way to oenology.

In her final year she got a phone call from Iona offering the role of assistant winemaker. Perhaps you could call it a lucky break. Most Elsenburg graduates without family wine farms start as cellar rats with a commensurate salary. It was there at Iona (purportedly the coolest vineyard in the Cape), under the wing of winemaker Werner Muller, that the wine bug really bit hard.

But Callan had not given up her dancing dreams in order to waste her life as assistant anything. Deciding to go it alone, she pulled out her savings, persuaded her dad to invest, registered a business, spent months researching, navigated the red tape, completed all her paperwork, and by the end of 2014 was on the hunt for grapes and a cellar.

The growers turned her down. She was too young, too inexperienced, too unknown and no one was willing to take a risk. By the start of 2015, harvest was approaching and she still didn’t have grapes. She was not going to be deterred. She kept banging on doors. Just in time, she managed to secure some Elgin fruit and a custom-crush facility. Her first vintage came in and suddenly there was no turning back.

With the disarming, callow honesty she’d so far shown, she tells me straight out: ‘At 24 you don’t know what you’re doing, and it was very stressful. I didn’t know enough. I remember constantly thinking, “What am I doing?! Should I really be doing this?” I was scared.’

She also had to sell the wine. Stubbornly she knocked on door after door, begging uninterested people to taste her wines, not leaving until they did. ‘It was hard. I was stressed beyond anything, tired, emotional, there was no one to advise me. I’d come home and cry.’ Once again, she was young, unknown, she was a risk. And the trade price of her wines was very high. But she didn’t budge. People tasted. People began to buy.

‘I’ve done everything on my own: accounts, invoicing, events, marketing, selling, winemaking. I’m a one-woman show.’ She designed her own labels and won The People’s Choice Award in the 2017 Wine Label Design Awards. All five of her importers found her through social media, which she brandishes like the sword of Boudica.

Nik Darlington, of Red Squirrel, her UK importer, tells me that it was originally a photo on Instagram that caught his attention. He started following her, and next time he visited South Africa he got in touch. It helps that she’s eminently photogenic, has the selfie down to a fine art, is of the generation that knows how to use an iPhone camera and all its filters to best advantage, and exudes this retro-modern rock-chick contradiction of fuck-you and vulnerability.

It’s not just on social media that she’s a blend of things that shouldn’t work. In the custom crush where she works, she tells me in a voice shiny with reverence that she’s learned so much from being surrounded by amazing winemakers from whom she could ask questions and get advice. But then her voice hardens a little and she tells me that despite being surrounded by lots of young guys doing interesting projects, she’s ended up advising them – on the business side of things. She takes fierce pride in her independence. But then she talks about Tim Atkin, who gave her wines a high score, and her voice really does melt with idolisation. She needs her heroes, and they’re not all sixties rock stars.

She has a strong faith, and is refreshingly open about it. But she swears like a farmer. She’s childlike, but has maturity beyond her years. She’s acutely image-conscious, yet wincingly frank. She’s naïve and streetwise.

So what do the wines of this paradoxical winemaker taste like?

Her white wine, cuvée name Jim, is a 100% Sémillon from Elgin. The 2016 smells like fresh quince, with buttery yuzu and waxiness. A bit of candle smoke. Then rich and broad-shouldered on the palate, filling every corner of the mouth. Creamy yet a core of freshness and clench that almost seems more mineral than acidity. Incredible sapidity and savouriness. Pears with a bit of quarry dust. The finish flares in the mouth with a wild explosion of life and joy and electricity.

The 2015, her first vintage, is herb-scented, soft green on the nose, borage flower and lovage leaf. There’s more tension, pulling a little tighter into itself. Dusty, a sweetness of white fruit that shifts every time you try to pin it down. There’s a floral element here that isn’t on the 2016. Some gentle pomelo and then lovely acidity, which takes time to fill the mouth. Not a wine that rushes in. Very Sémillon. I’d love to taste this with a Moss Wood Hunter Valley Sémillon.

Bruce is her red Cabernet Franc, also from Elgin. The wine smells of damson jam and boot polish. Cherries in syrup. Huge and spicy, Bovril and very, very ripe. Jammy, even, but wonderful juiciness. Tannins are soft and plump, redolent with an exotic bite of ras al hanout. Lots of throat-warming heat from start to finish. I struggle to find Cabernet Franc fragrance, fineness and minerality in this massively voluptuous, powerful wine, but there’s no mistaking its appeal.

This Bruce 2015 kicks in at a whopping 15.5% (the Jim is a much more civilised 14%). And therein lies my one criticism. I want to be able to drink more than a glass and stay awake. The ripeness needs to be pulled in by more than one notch.

That said, I have absolutely no doubt that this woman knows how to make wine. Not just that. She is brave, resourceful, resilient, determined and disciplined. She is as intense and as authentic as her Sémillon, as warm as her Cabernet Franc. And what she’s achieved in less than 10 years doesn’t just take talent and passion: it takes balls of steel.

It was Danish mixologist Lars Erik Lyndgaard Schmidt who became intrigued by the Cape quinine wine mentioned in the 1930 publication of The Savoy Cocktail book. A vermouth-style wine-based drink...