The eternity that is 10 years in the wine industry

Having become the owner of a new, bigger home earlier in the year, my bound set of Wine magazines has come out of the garage and onto the bookshelf. What, I wondered, where the topics of the day 10 years ago? 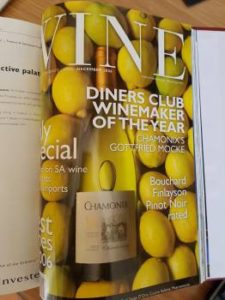 The December 2006 cover announced that Chamonix’s Gottfried Mocke had just been judged to be Diners Club Winemaker of the Year for his for his Reserve 2005. Of course, Mocke now works for Boekenhoutskloof and it remains to be seen if he will make a Chardonnay again. Francois Agenbag of Mountain Ridge Wines (previously Romansrivier Winery) was the Young Winemaker of the Year for his Seven Oaks 6+1 Reserve Cabernet Sauvignon Shiraz 2004.

Michel Laroche, then owner of Domaine Laroche in Chablis and L’Avenir in Stellenbosch among other international holdings, was the international judge – Laroche would later merge with another French company Jeanjean to form AdVini who continue to own L’Avenir as well as recently acquiring Le Bonheur plus a share in Forrester Vineyards.

In an editorial entitled “Through a Glass Darkly”, I argued that a classification of the Cape’s top farms remained almost impossible. Colleague Michael Fridjhon had come up with Buitenverwachting, Plaisir de Merle, Saxenburg, Stellenzicht and Thelema as his top five properties back in 1996, which compelled me to go on record with my top five of 2006, these being Boekenhoutskloof, Hamilton Russell Vineyards, Jordan, Steenberg and Vergelegen. Today, the question has to be asked: “Is it all useful to attempt a Cape Order of Merit given the very great state of flux that continues to apply?”

Eben Sadie along with business partner Dr Cornell Spies was busying building an 80 ton cellar to accommodate increased production of Sequillo (a label that Sadie recently discontinued) while the Griers of Villiiera had just completed their first harvest at Domaine Grier, their new property in France’s Rousillon area. Dave Hidden had established a 220 ton cellar on the Helderberg for his Hidden Valley wines – this sold to former Capitec Bank chief executive Riaan Stassen last year.

In other news, the 21st annual Nedbank Cape Winemakers Guild achieved record total sales of R3.6 million – compared to R13.8 million this year. Top performers at Veritas with two double golds each were Cederberg, Kanonkop, Nuy, Winecorp (later to unbundle into Spier) and Rust en Vrede. And the iconic Cape Town restaurant Aubergine headed up by chef Harald Bresselschmidt celebrated its first decade in business with a décor revamp…

The category tasting of the month saw local wines made from Italian varieties against their imported counterparts – Steenberg Nebbiolo 2005 (selling for R100 a bottle) and Sandrone Valmaggiore Nebbiolo D’Alba 2001 (which was available from Caroline’s Fine Wines for R257 a bottle) came tops, both rating 4 Stars. The current vintage 2014 of Steenberg rated 92/100 earlier this year (see here) and will set you back R240 a bottle. If a week is a long time in politics, a decade in the wine industry is an eternity