The winelands map is being redrawn and here’s why

Not so long ago Bot River was a village which wine lovers passed at high speed on their way from Cape Town to Hermanus and the Hemel-en-Aarde. For the last seven years, however, the wineries of the ward have organized an annual party to celebrate the end of harvest called Barrels & Beards – members of the public able to taste wines from the latest vintage from barrel before local winemakers, all wearing beards grown over season, take part in a variety show. 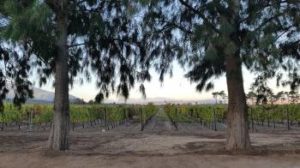 The national vineyard may be in decline – total hectares have dropped year on year from 102 146ha in 2006 to 98 597 in 2015 – but what constitutes our most prestigious and exciting wine producing regions has never been more fluid.

Two wines to particularly capture the imagination so far this year have been the De Grendel Op Die Berg Pinot Noir 2013 and the Mount Sutherland Syrah 2013. The former is classified W.O. Ceres Plateau, the vineyards 960m above sea level on the Witzenberg Mountains while the latter W.O. Sutherland-Karoo, the vineyards even more remote, 1 500m above sea level and 350km from the Indian Ocean.

Yes, Stellenbosch will always be renowned for its Cabernet Sauvignon but the hierarchy of quality is becoming more pronounced as time goes by – there are just a few pockets of vineyard which are capable of world-class wine rather than the area being universally capable of greatness with this variety.

Winemakers in search of excellence are therefore more inclined to strike out into less fashionable territory so we have the likes of Chris Alheit, Ginny Povall and Eben Sadie make breathtaking Chenin Blanc from the Skurfberg in Olifantsrivier while Reneen Borman discovered a vineyard in Montagu of all places which allowed him to do the same thing under his Patatsfontein label. There’s old vine Grenache in Piekenierskloof and old-vine Cinsaut in Darling that causes tempers to flair come harvest time as hotshot winemakers struggle to get their hands on grapes that will allow them to make something less ordinary while the Swartland’s credentials are now so well established, it’s is in danger of losing its “alternative” tag.

The other more established regions such as Constantia, Durbanville, Franschhoek and Paarl will no doubt follow suit and in some cases the process has already started. Anyone for a glass of Diemersdal Grüner Veltliner? It is well documented how unfavourable trading conditions in the South African wine industry are right now but as the old saying goes, when the going gets tough, the tough get going. Expect to drink wines from regions you never thought possible made from varieties you’ve never heard of in the not-so-distant future.