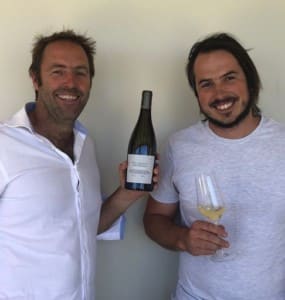 Sadie Palladius stands alongside such wines as Vergelegen White – and, looking further back, Welgemeend Estate Reserve, for example – as a Cape pioneer. But a more original one than either of those, as it was based not directly on a European model (Bordeaux blends, white and red), but more on local traditions and conditions. In that way a more equivalent pioneer would be another Welgemeend wine, Amadé, which was the first significant blend of Rhône varieties with pinotage, inspired by southern French cuvées but with a defiantly local major component – much as Palladius was inspired by a wider range of Mediterranean blends, with Swartland’s treasure-house of old Chenin providing the core to an unprecedented whole.

From the start, Eben Sadie insisted that his two wines, Columella and Palladius, were, firstly, designed to express the Swartland (I suggested in my last column that one might think of them as field blends, with the field being the whole of the Swartland); secondly, they were works in progress. Both remain emphatically Swartland expressions, and I’d guess they are still to an extent works in progress, though change is likely to be more gradual and minor than it has been in the past.

Palladius, as last week’s vertical tasting (at the Paardeberg home-farm, Rotsvas) of the first 15 bottlings showed, has in fact changed noticeably over the years. More so than Columella, and, I’d say, with a greater element of quality improvement. In both wines, a significant moment was the lightening-up that occurred around the 2009-2010 vintages, but the effect was more marked in Palladius, as the lower alcohol levels and reduced ripe-richness coincided with a continued reduction in the level of residual sugar (it had gone up and down a bit before, but kept under four grams per litre from 2003). This latter change to me is crucial, and the settling into the newer balance and freshness means that Palladius emphatically became a world-class wine in a way that it wasn’t quite before – though it was always a very good wine after the maiden 2002, which was spoilt by the residual sugar refermenting in bottle.

Part of the development towards greater finesse and appropriate dryness (rich, warm-country wines can less afford sweetness, I think), is the change in varietal mix – which also brought about a greater degree of complexity. The viognier and chardonnay that were important in the early vintages were greatly reduced (chardonnay has now been expunged as not being really at home in the Swartland), and the grenache blanc component increased. 2007 introduced Clairette Blanche for freshness and lightness; 2008 brought early-picked Roussanne (as well as the shift to a Burgundy bottle and a new label), and 2009 palomino and Semillons blanc and gris; Marsanne came in 2014 and colombard in 2015. Most of these varieties are picked relatively early, crucially adding lightness and freshness.

It must be said that all the vintages we tasted last Saturday were still alive and well (including the remarkably clean, but austere and slightly petillant 2002 – last time I tasted it, in 2008, Eben said all it needed was to be left 10 years…). But whether you’ll enjoy the vintages up to around 2009 will depend on whether you like the effect of bottle age on this style of white wine. I don’t, particularly, though I love much old riesling, for example. My conservative rule would be to drink warm-country South African wines within five or six years of the vintage. (Though I’m often glad I ignore that rule; and cooler-origin wines like Boekenhoutskloof Semillon and some chardonnays and Bordeaux blends keep well much longer.) It’s a matter of taste. I certainly wouldn’t decline a glass or two of the older Palladiuses (especially the 2003, and the 2005 and 2007), but the dominance of tertiary notes on the nose (more than on the palate) and the presence of a slightly heavy sweetness means that I wouldn’t clamour as loudly as I would for the exciting, lively 2009 – or the slightly too-sweet but lovely 2010, let alone the magnificent wines from 2011 onwards.

It’s a matter of freshness, really. And sheer drinkability – to my palate. And overall elegance and energy added to the still-present touch of richness. 2012 – particularly youthful and a genuinely good candidate for further maturation – was the first Palladius below 14% alcohol, with early-picked grenache and Clairette showing their inverse force. 2013 was the first genuinely dry bottling, under two grams per litre. 2014  – grippy, delicious, fresh and lovely, certainly needing more time in bottle – was the first from the new Palladius cellar, with no oaking until the blend matures in foudre for its second year. The transition to sheer excellence is confirmed with the subsequent vintages. (See Angela Lloyd’s commentary on the tasting for more detailed notes.) All of these should easily, I think, require me to double my own guidelines of allowing white Cape blends to mature; it will certainly be exciting to watch them develop.

There is no doubt that much of the achievement of Palladius has been hard-won by work in the many Swartland vineyards from which it comes, as well as from decisions (such as earlier picking) and refinements in the cellar. There, Paul Jordaan is showing his skill and his understanding of what Eben Sadie has been aiming and striving at for so many years.

Palladius is no longer quite alone and untouched as a great Cape white blend. Paradoxically, perhaps, that must be regarded as one of Eben Sadie’s great achievements. But a great wine it certainly has become.