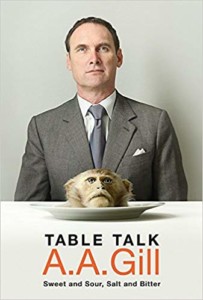 A few years back, a wine-world acquaintance started chatting with me about local wine-writing – in not wholly complimentary fashion. He did say that over the years he’d read a few pieces of mine that he’d found readable … but couldn’t I perhaps write more like A.A. Gill (the late, famous restaurant critic of the London Times, and generally a great journalist)? Like A.A. Gill! If I could do that, I said (or should have said) not only would I be rich and famous but I would be chatting with other famous and important people rather than the likes of you.

There was one slight connection between me and Gill,  in a certain tendency to a harshness of judgement – always rather muted in my case and now virtually disappeared, given the sunshiny tendency of wine writing, which seems to require that (as mummy always wanted) if there’s nothing nice to be said, rather don’t say anything at all. Gill was spectacularly, brutally, incisively and hugely wittily rude (and often really nasty) – a master of invective. His writing though revealed a great deal of intelligence, understanding and a humane sympathy beneath all the rough stuff.

As I can’t write like A.A. Gill, I re-read him quite often – partly, probably, in the hope that a little brilliance will rub off, but mostly because it is such a pleasure. Recently I was reading again (in the collection of pieces called Table Talk: Sweet and Sour, Salt and Bitter) his accounts of his visits to South Africa. He used to prophesy, he said, “that South African food would be the next big thing”.

He realised why it “hasn’t happened” at a fine-dining restaurant in Johannesburg (in 2005), where the menu was of “unfounded self-importance, frenchified in snobbery, though not in taste”. While I think he’d find the food better at South Africa’s many more fine-dining places these days, if not less pretentious, his observation about the ultimate failure of the national cuisine remains at least interestingly suggestive. It’s worth quoting at length:

“This was dinner pretending to be somewhere else. I saw a truth that I should have known all along: it’s not cooks or ingredients that make great food, it’s hungry people. National cuisines must be egalitarian. I don’t mean that everyone eats together, or that they can afford the same, but that the national recipe book is held by all in common, that everyone will have experienced the same cooking. And that’s not yet true of South Africa. There is still plate apartheid.” (Which all makes Anna Trapido’s recent review of Kobo Cuisine particularly interesting.)

And, of course, there is still wineglass apartheid – certainly liquor apartheid. Though as the class-race structure shifts and the two great dividers become less coterminous, that is getting more nuanced and less rigorous too: very different from the darkest days when liquor apartheid was legislated and its enforcement attempted.

What effects that has on our wine industry I’m not sure, apart from the obvious one – and I’m always surprised at the relatively lacklustre attempts to bring the pleasures of responsible wine-drinking to more local people. It’s everywhere true to an extent that countries which produce a lot of wine tend to have effectively two wine industries: the more artisanal one and the more industrial one. But it’s probably more significant here than anywhere else (and least significant in New Zealand, I’d guess), with the artisanal element notably small and exports relatively substantial – now about 50% of production, which I’m not sure is healthy.

I’ve suggested before that it’s going to be more difficult to build the top-end of wine production in this country than anywhere else. There’s no greatly successful wine-producing region anywhere that I know of that doesn’t have a sizeable rich local market, though the definition of local has changed with modern communications – Chile and Argentina to an extent have the USA that regards those countries as approximately local; Europe is essentially one large unit. To the extent that the much-vaunted growth of a secondary market is happening here, and also that top-end wines are very much pricier in real terms than they were a few years back, that’s at least partly because some of the richer local wine lovers, cultural cringers mostly, are being obliged by the drop in the rand to look to the Cape for their tipple.

That issue is not really “wineglass apartheid”, but these things are all connected. I’d like to know what A.A. Gill might have observed. But Adrian Anthony Gill wouldn’t have paid much attention to the problem – he was an alcoholic who gave up drinking at the age of 29. It seems the use of “A.A.” in his professional byline was a tribute to Alcoholics Anonymous, which helped save his life.