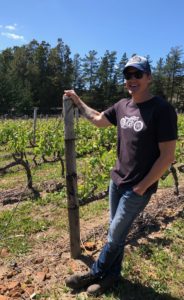 Has anyone reading this, cracked a bottle of 2019 yet? I haven’t, though it’s perfectly possible, even if I don’t know exactly when the first Sauvignon Blancs, unwooded chards and the like from this harvest came onto the shelves. They’re certainly there now. And yet, more than three months after the Cape’s first grape-picking of 2019, Craig Wessels of Restless River is still waiting for one of his blocks of Hemel-en-Aarde cabernet sauvignon to ripen. His record for lateness has been a 26th of April harvest, but yesterday (the 25th) he told me he’ll certainly be going into May this year. He’s hoping for more of today’s glorious autumnal sunshine – there’s been so little of it in the valley’s April, which “has been miserable as hell”.

The fine Restless River cab now has the prefix Main Road & Dignity, reflecting the two vineyards that provide the grapes. It’s the Dignity block where the grapes are yet to be picked; the Main Road block was harvested over late March and early April (and the farm’s chardonnay and pinot noir a month before that). Craig is a bit anxious, of course, about the crop still hanging (slightly reduced already, as he’s gone through the vineyard four times already this month to seek out grapes showing signs of rot brought on by the damp conditions). But he knows that growing cab in the cooler conditions of the Hemel-en-Aarde is never going to be easy – anxiety is the least price to be paid for the lighter, fresher elegance that he values. And he’s hoping that 2019’s long hang-time will prove valuable in terms of flavour intensity and character. Meanwhile, he waits for that sudden change in flavour profile and tannin structure that will signal that the grapes are ready for him.

So there’s something like four months between the Cape’s first bit of harvest and the last – a third of a year! Climate and grape variety and their manifold permutations are, of course, the primary determinants of picking date. This timespan alone must surely indicate the absurdity of making easy generalisations about the vintage: a lot happens between January and May. But no doubt we’ll try. VinPro’s official 2019 Wine Harvest Report will be issued in a few weeks and will contain a wealth of detail and differentiation, as well as what general conclusions it seems possible to draw. One of which is likely to be that the total crop is down even on the drought-affected harvest of 2018, and this will have significant financial implications for many grape farmers and wine-producers.

The lingering effects of that drought (the Karoo still particularly suffering from its continuation) are part of what is surely going to make this year’s harvest even less susceptible to generalisation than usual. Many vineyards, especially in dryland areas like the Swartland, simply have not had time to recover from the pounding they took over three drought years, with yields still reduced and quality not always up to scratch. But even this is not an inevitable truth – Chris Alheit, for example, seems generally very happy with the quality, and reports higher yields on some of the dryland vineyards he picks; certainly vineyard management will prove to have been of perhaps even greater significance than usual. But lower natural acid levels, producing softer and earlier-maturing wines, are not unusual in these areas. (The cynics report increased misrepresentation – ie lies – with regard to acid additions.)

Another factor of greater or lesser significance, but fairly widespread, is the strange patterns of heat and cold last winter and early spring, which led to notably uneven budbreak and flowering. The result has included unforeseen ripening patterns: André van Rensburg of Vergelegen told me that his experience of decades on the farm has been overthrown, with some varieties ripening earlier than usual, some later. “Weird” is not an unusual description of vintage 2019.

Chardonnay seems to have been a notable sufferer – less in terms of quality than of quantity, with yields in Stellenbosch 10 – 40% down. But again, beware of generalisations across the Cape: Craig Wessels at Restless River says his chardonnay reached maturity while retaining beautiful, good acidity, and his crop was even slightly higher this year. Compensation, then, for his anxious wait for that cabernet sauvignon.