In early January, as the syrah berries were making their definitive turn from green to purple, I visited Saxenburg – one of the earliest Cape estates to far-sighted specialises in the grape which has become so important at the highest levels of South African red winemaking. In fact, though, Syrah wasn’t in the range when the farm, then marketing under the Saxenheim label, was acquired in 1989 by a Swiss group (including the Bührer family, which very soon became sole owners). Incidentally, a youthful André van Rensburg was the winemaker for a year or so.

Nico van der Merwe took over for the 1991 vintage, and during his long tenure in the cellar (he left to concentrate on his own label in 2017) shiraz came to be what Saxenburg is best known for. The first vintage of the estate’s flagship wine, the Saxenburg Shiraz Select 1997, was ambitiously launched as one of the country’s most expensive wines – and amidst all the current aspirational pricing, it’s still up there, generally retailing at over R1000. The wine became established as big, ripe, rich and oaky, with an American oak component adding to the touch of effective sweetness.

Saxenburg is a large estate, on the slopes of the Polkadraai Hills  – an area which has in recent years become established as the source of arguably Stellenbosch’s currently finest syrahs, given the examples from Reyneke, Sons of Sugarland and Van Loggerenberg, and most recently Damascene (though Bottelary also contributes to that). Is it just a matter of style that separates Saxenburg’s top wine from these? When Christian Eedes tasted the 2009 in 2017 he remarked that it was “not unaccomplished, but out of fashion relative to something like Porseleinberg”. Was it, he wondered, “time for Saxenburg to re-invent its flagship?”

In mid 2019 I tasted the not-yet-released 2015 (there had only been a 2013 since the 2009) and was impressed. Not exactly a re-invention, but there was certainly some move away from the blockbuster, “Parkerised” style, with now just 70% new oak, for example, though the wine was still nowhere near the new-wave transparency of Lukas van Loggerenberg’s or Reenen Borman’s. But, I suggested, “a case can be made for Stellenbosch syrah to be made in this more traditional way – as long as it’s as well made as this. It is a stylistic choice: the oaking and sweet plushness will seldom greatly appeal to those who like the nakedness of the others.”

I tasted that 2015 again on my recent visit – it was for imminent release – and again thought it impressively intense (and still pretty oaky), with the admirable tannins that seem to come with the granitic Polkadraai Hills. The 2017 continues the stylistic shift: it’s lighter and more restrained and, I think, the finer for that. For my current column in World of Fine Wine, I wrote about the emergence of terroir characteristics in the Polkadraai Hills syrahs; the Saxenburg Shiraz Select 2015 is starting to give evidence of its origins in some aromatic and flavour nuances as well as its tannic structure. I doubt if the approach in the Saxenburg cellar is going to change radically (and, as I said, why should it?), but this is a welcome development. 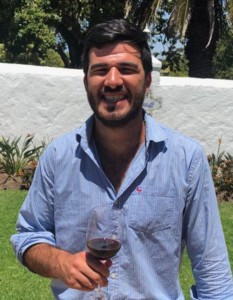 This change in the SSS is emblematic of a what seems like a subtle shift in focus in recent years since the energetic and committed takeover of the management of the estate by Fiona and Vincent Bührer, representing the next generation of the owning family. It’s presumably being made easier by the change in wine-cellar management, with Nico being succeeded for a few years by his assistant, Edwin Grace, and, since late last year, by young Dirk van Zyl, formerly of De Morgenzon. Interestingly and tellingly, Dirk is to have the benefit of the collegial opinion of one of the emerging stars of contemporary, new-wave winemaking: Reenen Bornman of Sons of Sugarland and of nearby Boschkloof is a consultant. That presumably wouldn’t be happening if the intention were not to go a little further in moving back from the imposing, more-is-more style that has characterised Saxenburg’s ambitions, and towards a more limpid, terroir-expressive one.

That’s an exciting thought, for this is a fine property, with a range of exposures for the syrah it continues to specialise in. A lot of work is going into rebuilding the vineyards, concerned to combat virus. They look notably squeaky clean, in fact, and I was pleased to note Dirk’s obvious interest in the one comparatively scruffy-looking vineyard of bushvine syrah, and his talk of experimenting with some wholebunch fruit from it.

I’ve left myself little space to talk of the other Saxenburg wines I tasted on my recent visit, so let me be brief. The entry-level Guinea Fowl Chenin Blanc and red blend are very decent wines and good value at about R70. Of the Private Collection range, I enjoyed the delicate Sauvignon Blanc 2019 and the full-fruited, quite intense Chardonnay 2017 (put it aside and enjoy the more obviously charming, lighter 2018 first, I’d say). Of the Private Collection reds, the Pinotage 2017 was the big surprise, being lighter (just 13% alcohol) and more pleasingly modest than I’d expected: balanced, fresh and rather gorgeous. A good portent, I think, for what’s to come from the Cabernet Sauvignon and Shiraz from that vintage – and generally from Saxenburg’s slow, but incremental shifting of aesthetic.

Using whole bunches (not destemming) in the fermentation as a means of achieving extra interest has been fashionable for a while now, especially for Syrah. It was therefore curious to...