Spring’s arrival has seemed rather more convincing in the Western Cape the last few days, with sunny skies and warm sunshine. The vineyards have known change for a while now, the dead-looking vines thrusting out those tight handfuls of fresh green leaves that look somehow sticky. The drought seems to have been broken – though farmers  whose vines suffered most are still unsure whether the vineyards will have recovered sufficiently (those that didn’t succumb entirely) to produce a decent crop in 2019. 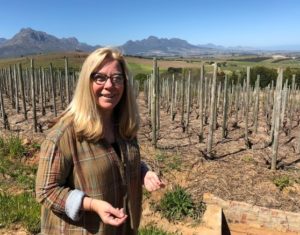 But Stellenbosch didn’t suffer too much and everything was looking fresh, hopeful and eager for the future last Saturday morning when I visited Ginny Povall’s Devon Valley farm, Protea Heights. As we walked up between vineyards and protea plantations, the views were lovely enough to make obvious answer to a question why Ginny sunk her dollars into this farm back in 2008 (she was not long previously a serious player in New York corporate life). It was then producing only proteas for export, and that’s still a vital part of it, more lucrative than the wine; there’s also a guesthouse, but I think it could be said that Ginny’s heart is not really in that. It’s really in growing and making wine.

She’s best known for her Mary Delaney Collection (known as Botanica till that was challenged – she decided not to fight, and keeps Botanica as the overall name, and flowers as a general theme on the labels). Her fine Chenin Blanc from the Citrusdal Mountain area now loosely known as the Skurfberg is famous, in a quiet way. She was, incidentally, the first wine producer to have a contract with a farmer up there, beating Anthonij Rupert and Eben Sadie to it: her maiden vintage was 2009 (it got five stars in Platter), the same as OuWingerdreeks Skurfberg and Cape of Good Hope Van Lill & Visser Chenin Blanc.

The Mary Delaney Range has grown in scale and renown since then, though its presence in the local market is more muted than it should be – Ginny admits she has not been the greatest of marketers. There are now also a pair of Hemel-en-Aarde pinots, a semillon from Elgin, and the Fire Lily Straw Wine from Stellenbosch viognier. She makes them all in the Zorgvliet cellar, but hopes to soon move at least the red winemaking to the home farm.

The wines in Ginny’s Big Flower range are especially important to her, however. They come from her own five hectares of vines, which she started planting in 2009: cabernet sauvignon, merlot, cab franc and petit verdot. (“No malbec”, she said decisively, but I neglected to ask why.) Incidentally, I’ve never seen cab sauvignon planted in the way some of it is here, designed to cope with a fairly steep slope: fairly densely spaced, basically as goblet-shaped bush vines, but each with its own pole, to which the shoots are grouped and tied: echalas in French, stok-by-paaltjie in Afrikaans (and irritatingly wordy in English).

Ginny gave me three vintages of her Merlot to taste. The maiden 2014 I liked immensely. Not at all a light wine, but quite fresh and rather elegantly balanced, with a firm tannic structure. Serious, proper wine. The 2015 is bigger and riper and more voluptuous – partly vintage, I suppose, but also reflecting Ginny’s confessed “conflictedness” about style. Her American importer prefers wines like this, but she doesn’t and seems set to keep rather more restrained. Only old oak used, which helps keep the wine from blockbusterdom. But the 2015 is a good wine – it bears a “93 points” sticker from Tim Atkin, so he thinks so too. The 2016 (bottled but not to be released for a while) is delicious and spicy-savoury, in the more refined 2014 mode, I’m pleased to say. (The 2015 doesn’t seem widely available, but I see it for R170, and other Big Flower wines, on Port2Port.)

The Cab has been around since 2008, but the first from home grapes was 2014. The 2015 is a very good expression of the variety, also matured in older oak, with a very good tannic-acid structure but not quite up to the Merlot 2015 in balance, I think, and a little too obviously ripe and sweet for my taste. There’s also a Cab Franc, also in the riper, big style, but less successful than the other two varietal wines. The grapes all come together in the Aboretum blend, made up of selected barrels (some of them new oak). Unfortunately our bottle of 2014 was not at its best, but the 2015 (43% cab) showed well – more restrained than the other 2015s, with a drier finish; savoury, well structured and balanced.

So far it’s looking as though merlot is the star performer of the farm. But the vines are maturing and so is Ginny’s confidence and skill with vinifying the Bordeaux varieties – unsurprisingly, given her well established flair with white grapes and pinot. I think she’s hankering after lighter, fresh and elegant wines, and I much look forward to them.