Tim James: A visit to Oldenburg 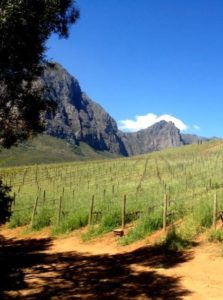 Come over the Helshoogte Pass from Stellenbosch, past Thelema, Tokara and Delaire on the crest, and there’s the lovely Banghoek Valley around you as you plunge down towards Pniel – with Franschhoek often enough as your goal. Banghoek (some prefer to drop the G and speak of Banhoek) is a ward in in its own right, but seldom invoked on labels. And little explored by me down the slope, I confess with some shame, though I’m aware of some increasingly interesting wines being made there.

Until recently I had never once turned off that steep main road in the direction of the splendid distant mountains. But then I did, to visit Oldenburg Vineyards, to taste some wines, look around, and have lunch with Adrian Vanderspuy (Swiss-based, though locally born, owner of Oldenburg since 2003) and his newish cellarmaster and GM, the experienced Philip Costandius. So far did I have to drive along the gravel road, in fact, that I wondered if I was on the right track – but eventually I arrived at the beautifully situated (well, that’s inevitable really, here) farm buildings and tasting centre.

The views are wonderful, enough to surely make any vine (or visitor) content, but the most surprising, interesting and viticulturally exciting feature of the farm is the hill that rises out of the valley – Rondekop, it’s unimaginatively but inevitably called, and it gives a range of aspects, altitudes, soils and climatic conditions (the wind beats fiercely at some points, and I was intrigued to see some young grenache bushvines each propped up by a boulder to resist its force).

As to the wines made from some of these vineyards (many grapes are sold off)…. I must say that my appreciation of Oldenburg reds in the past has been limited: the ripe and showy, richly extracted style which helped them win many admirers – and awards – didn’t much appeal to me. On this visit, the very lightly oaked pair of Oldenburg white wines – a Chardonnay and a Chenin offered a very different, more understated style, and I much enjoyed the pure-fruited 2015s, even if they are as yet a little short of the ambitious heights which these varieties can achieve in Stellenbosch.

But, on the evidence of the 2012s and 2013s I tasted, the reds have been reined in (though the Grenache 2014, which I tasted on an earlier occasion, certainly doesn’t confirm that trend). The Syrah 2012 (the 2013 was corked!) was probably my favourite of what we tasted, sitting on the stoep of the homestead, all the glory of the mountains and vines in full view. It’s firmly structured, with full flavour, but some freshness, the oaking well calculated (oak use has always been nicely controlled at Oldenburg, I think), and not too big. I also especially enjoyed the Rhodium 2013, the merlot-based flagship with other Bordeaux red grapes playing a minor role; despite a little residual sugar, it’s more elegant than the Cab and Cab Franc (good as those are), still quite tightly coiled.

This is clearly an estate with a great deal of potential, and the most positive thing I learnt is that a new cellar is in the offing – Vanderspuy is just waiting for a municipal go-ahead to start building. With any luck it will be ready to take in the 2018 harvest. At present the wines are vinified elsewhere, which is inevitably constrictive. Having his own cellar will, amongst other things, allow Costandius to make the experimental micro-vinifications of different vineyard blocks that should bring a fuller understanding of the Oldenburg terroir and how best to respond to it.