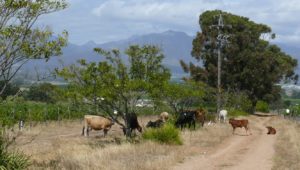 A scene from Uitzicht, home of Reyneke Wines.

A few years back Reyneke Biodynamic Syrah offered perhaps the most extraordinary price:quality ratio in Red Cape wine. Sadly for us, Reyneke’s prices have increased fairly substantially, though the value is still there – just not quite as remarkable. The 2015 Syrah is gettable for R165, and I’m pretty confident you won’t find better syrah value than that (anywhere in the world, perhaps). I recently bought some of that vintage myself, but on my visit to the farm a few weeks back it was the incoming 2016 I tasted, with winemaker Rudiger Gretschel, his assistant Nuschka de Vos and viticulturist and farmer-owner Johan Reyneke.

As with the white wines (which I reported on last week), we tasted two vintages of each of the reds. The 2013 Syrah is developing beautifully, with its ripe sweet fruit overlaid with dried herbs (coriander included) and other savoury notes. Only older oak was used in maturation, as with 2016, which was part barrique, part foudre. This latter wine had a 30% whole bunch component, which shows well in a bright, fresh elegance, and the refined tannins beautifully balanced with a good acidity. The style of the Syrah has been evolving in this direction, away from fruit sweetness, to its great benefit.

Reyneke Reserve Red has been pure syrah since 2012 (no 2011; the 2010, drinking magnificently now, still had a cabernet sauvignon component). It comes from just one of the four syrah blocks on the farm – brilliant grapes delivered by Johan Reyneke into the masterly hands of Rudiger Gretschel, resulting in what has grown into undoubtedly one of the Cape’s top few syrahs (and top few red wines, in fact). The current 2015 is already pure loveliness and subtle excitement, with a burgeoning complexity, freshness, intensity, a firm but (if you’re really impatient) approachable tannin structure. At R450 this must also count as a fine bargain, especially in international terms. You’d pay double this for some Hermitages and Côte-Rôties that don’t measure up (some do, happily!). The 2013, which we tasted alongside it, is at the early stages of development, the aromas quite remarkable. It has all the balance of the 2015, but perhaps not the harmony and grace.

Moving on to the Bordeaux varieties, one can see – and taste – something of a split in Rudiger Gretschel’s approach at Reyneke. If the syrah wines are firmly attuned to the modern, fresh line pioneered in South Africa in the Swartland (and remember that Rudiger also makes the splendid Leeuwenkuil Heritage Syrah – if anything an even better bargain than the Reserve Red), then the cab-based wines are still pretty Stellenbosch in style: riper, richer and more powerful, with new oak. Appropriate to the variety, arguably – and the Cabernet Sauvignon is a world-class example – but if you particularly like the syrahs, you might not as much enjoy the others (and vice versa). Or you might, if you’re broad minded.

Cornerstone is a good, balanced, ripe, slightly sweet-finishing blend of cab, merlot and cab franc, but for me the least interesting and impressive of the range. The straight Cabernet Sauvignon is a different story, in terms of quality. The first bottling was 2013 (another wait from Rudiger for things to come together just right, another top farm vineyard lovingly nurtured by Johan), and that wine recently got a rave review and a 20/20 score from Brit critic Matthew Jukes. And why not? It would stand up impressively, I’d say, in any line-up of top modern Bordeaux-style wines from around the world – already drinkable but with a long way to go, big and intense, tannic and powerful, but with a real refinement generally lacking in Stellenbosch’s best cabs. The 2015 is in the same mould.

The truly remarkable thing about Reyneke is not simply the great quality of the whites, or the great quality of the reds, but that this one estate can encompass such a range of excellence. It would be a brave person, and an abstractly terroir-obsessed one, who’d say that this soil on some mildly varied Stellenbosch slopes was most suitable for one variety alone. I don’t think it’s going to be either Rudiger or Johan, so for the foreseeable future, thankfully, we’ll continue to be treated to the whole bloody lot.