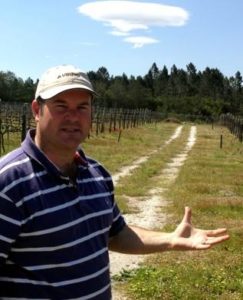 The longest row of vines at Shannon Vineyards is just over 100 metres. I’m a bit embarrassed to say that the detail I remember best from a recent visit is probably this rather trivial one – though I spent a few hours with James Downes driving and walking around this beautiful Elgin property. The vineyards (just over 15 hectares of them) are interspersed with apple and pear orchards – which adds to its charms – and James is clearly intimate with virtually every vine, every bump and wrinkle in the landscape, every shift in soil composition.

But some things stick better in trivial minds…. James told me how a senior viticulturist told him when he was starting out that he should never plant a vineyard with rows longer than 100 metres. That way, even when you’re out for a walk round the farm with your kids, you can always see at a glance to the heart of any vineyard and notice any problem. I liked that idea, and clearly James had too.

Rosa Kruger tells me that one of the reasons James (who owns the farm with his brother Stuart, and has the eminent Kevin Watt as a consultant) is a fine viticulturist is the caring and understanding about detail that is part of the legacy of being a good fruit grower – their father, Keith, she says, was one of the best ever Elgin farmers. “It’s the one-on-one with every vine that’s important”, says James; “learning to read the vine, responding to its strengths and weaknesses.”

Rosa consulted here once upon a time, and James tells a good story about how she confronted Keith when he wanted to uproot the best merlot vineyard whose yield wasn’t sufficiently high, and he (uncharacteristically, and as charmed and bewildered as many have been by the feisty Rosa’s conviction) gave in – to which the existence of the Shannon Mount Bullet merlot is owed.

The farm’s vineyards gained their reputation through wines made by others – and still something near a third of the vines, especially pinot noir off a dozen site-specific blocks, bear fruit for a few smart names. But their own label is thriving, with the wines made by Nadia and Gordon Newton Johnson in the Hemel-en-Aarde. James generously showed me at least a few vintages of each.

Sanctuary Peak is a serious, white wine, matching a firm tight structure with generous ripe aromas, pear the keynote for me on the 2015 – a fine advertisement for Elgin sauvignon blanc (this always has a little oaked Semillon included to add some weight and richness). I caught this in the full flush of its youthful zest and fresh energy, while the 2014, though attractive, has clearly gone into something of a dip and should be left a few years to start showing its best.

A straight Semillon made its debut with the 2012. This wine also deserves at least a few years in bottle to bring out the characteristic lanolin, honeyed complexity. The current 2014 – smoky, sweet peach, citrus and tangerine fruit, with a lively acid crunch though I think I’d have liked it a touch drier despite its balance – seems to me quite an improvement on the 2012.

Mount Bullet was my least favourite of the line-up, though each of the three vintages I tasted (2010–2012) differed in nuance, with a meaty, richly power a unifying factor. Will have many deserved admirers, but it’s rather bold and relentless for my tastes.

I used not to be a fan of the Rockview Ridge Pinot Noir either, but I like it much more now. James gave me four vintages, with the 2011 showing the start of a transition to a purer-fruited, fresher, less oaky style. But this is intended, I think, to be a pinot stressing some savoury and darker elements rather than the easier, fruity charm that is so immediately winning on many local pinots. There’s very pleasing development on the 2012; I enjoyed the 2013 best, with its perfumed hints, subtle but effective tannic structure and air of restraint; 2014 perhaps a little uneasy still – these are wines that need, and deserve, a good few years.