Tim James: A visit to Stark-Condé

Jonkershoek Valley is the quietest and most remote-feeling and rural of the Stellenbosch wards. It’s a beautiful, mountainous place, largely left to nature (the Jonkershoek Nature Rerserve covers some 11 000 hectares), and once one has passed Lanzerac on the edge of town and entered the valley, of wine interest ahead are only Rudera (on the farm once home to Le Riche) and then Stark-Condé Wines on Oude Nektar.

Oude Nektar farm was bought by Hans Peter Schröder in the late 1980s and – to cut short a longish story in which Japan features in all the principals’ lives – it became the home of a winery, with American José Conde (married to Marie, daughter of Hans Peter and his Japanese wife) as winemaker. The winery recently issued a rare invitation to attend a vertical tasting of the Three Pines Cabernet Sauvignon (2000-2014) and, a matter for celebrating, the presentation of a Certificate of Commendation to Mr Schröder by the Japanese Ambassador, acknowledging “his role in fostering cultural relations”.

It was altogether a delightful visit to the beautiful farm, from the award ceremony held on the island in the koi-filled lake, to an excellent but casual Japanese-themed lunch at the farm’s Postcard Café. Via the all-important tasting in the barrel-cellar. 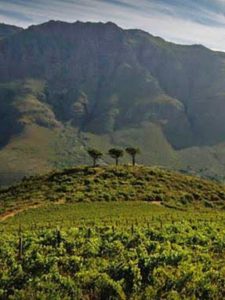 The tree pines of Oude Nektar.

The Three Pines Cab (which latterly includes up to 15% of merlot and petit verdot) has been remarkably successful in terms of awards both locally and internationally – including Best Cabernet Sauvignon Trophies at the Six Nations competition for the 2009 and 2011 vintages and double-gold there for the 2013. That’s a substantial achievement – especially, as both I and Cathy van Zyl MW who was sitting next to me at the tasting thought, because there’s a definite herbal, sometimes outright herbaceous character to the wine in some vintages (notably including the 2011), no doubt reflecting the cool conditions of the high-lying vineyard that’s the wine’s origins, but a character not usually appealing to Antipodean judges.

This vertical tasting revealed a generally impressive wine, typically powerful and rich, with a savoury element to its full flavour and a serious acid level (again reflecting its site) as counterweight to the fruit volume, and helping achieve a welcome dry finish – something not all that common in Stellenbosch cab. The oldest vintages are still drinking well, especially for me the more elegant, lighter 2001; though it must be said that there is little real tertiary flavour complexity in these mature wines: the wines have aged well rather than developed well, though there’s a gain in harmony, with fully softened and integrated tannins.

The young wines are big and fairly bold, but well balanced and enticing – though really they deserve a good few years in bottle to be really approachable and rewarding. Undoubtedly Threes Pines is at the top end of the Cape’s cabernets.

By the way, another, very different Stark Condé wine has won a Six Nations trophy. This year the White Blends award went to Stark Condé Field Blend 2015: roussanne, chenin, verdelho and viognier picked, pressed and fermented together. It’s a gorgeous, intense and substantial wine – though the price it pays for that prize-winning opulence, I found (halfway down the bottom of the bottle that was given to each of the guests on that memorable visit), is that this is perhaps more a wine for a glass or two than for over-indulgence with.

That’s probably true of the Cabernet too (and of all weighty wines). But it counts towards a characterisation, not as a judgement in itself.