Tim James: Alcohol on labels and other regulations 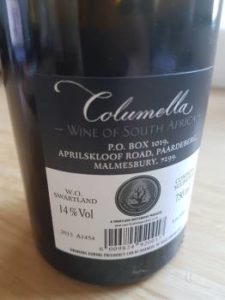 There are, sadly and obviously, a vast number of things which I know I don’t know. But in a few paltry areas I feel pretty well informed – meaning that when I find myself wrong there, it’s a blow I didn’t expect. It hurts more. If you’d asked me this morning about the accuracy requirement of the stated alcohol level on a bottle of South African wine (on local shelves), I’d have told you with something like certainty that the tolerance was 0.5%. A few hours ago I learnt I was wrong.

I was put right while browsing through the South African Wine Industry Directory 2018, which I’ve been idly thinking about reviewing for Winemag. Hah! I thought, here’s the sort of error that a rigorous and grumpy reviewer likes to find. Fortunately, a rigorous reviewer also (usually) goes to check before making accusations, so this one did just that.

Here’s what Sawis’s guide to “Labelling requirements for South African wine says: “A tolerance of 1 is permitted between the strength labelled and the alcohol strength determined upon analysis of the wine. A wine of 11,5 % vol may thus be indicated as 10,5 % vol up to 12,5 % vol.”

I mention this not because it’s so astounding for me to be wrong but because I have a feeling, going by conversations over the years, that many others are also misinformed about this matter – which is not an insignificant one, given widespread concerns about alcohol levels in wine. Perhaps the confusion arises because in practice (certainly for the wines that you and I drink), the tolerance of 0.5% is observed – because, as a little more research revealed, that is what Europe requires (as does China), and few producers want to print different labels for different destinations, and so tend to observe the strictest requirements. Incidentally, Europe doesn’t allow you to put the actual alcohol level (13.6%), as South Africa does – you are obliged to round it out to a full or half percentage units (13.5 or 14%).

Oh, and in conceptual brackets to avoid being put right by a well-informed geek, the permitted tolerance in Europe rises to 0.8% for a few categories, most notable sparkling wines – no doubt for good technical reasons.

If, like me, you’re a bit shocked by the wide tolerance allowed within South Africa, an even wider one is allowed in the USA, Australia and New Zealand. Within those countries, you can have a wine that’s actually 15.4% alcohol and label it as 14%.

Why? is the obvious question.

Wide tolerances like these (and South Africa’s) are pretty intolerable themselves, surely. And there are others too, of course. The “85% principle” applies in most countries to vintage and variety (a few are stricter or more tolerant). So you can have here, for example, a wine labelled “Chenin Blanc 2017” which might contain, without any obligation to let the customer know, 10% chardonnay and 5% hanepoot, and/or 15% of its contents from a totally different vintage.

Seems absurd, doesn’t it? But it’s part of a pattern of legislation which is primarily designed, I reckon, to please big commercial producers who want a spurious consistency of quality and style from year to year and who know that strict honesty is not always compatible with this. Rigorous labelling, like most regulation, potentially helps the consumer much more than the producer; we need more of it.