Tim James: Amphoras and qvevri – the making of wine in clay pots

Unless I’m mistaken, the first modern South African experiments with fermenting and maturing wine in clay pots happened at Hamilton Russell Vineyards in 2005. Anthony Hamilton Russell spoke of their aim “to replicate the air exchange of a traditional barrique without getting any oak flavour”; an increase in “minerality” would be a further bonus. First, terracotta amphoras (or amphorae if you choose to be Greek rather than English about the plural) were used at HRV, but proved too porous. Then they started commissioning local clay pots, lined with clay from the farm itself, for the sake of terroir.

Wine from the pots went in a small way into the HRV Chardonnay, but in 2013 some of the Sandstone blend from another H-R property, went into Ashbourne Amphorae – surely the first Cape wine matured solely in clay. The second such wine released was, as far as I know, the brilliant Grande Provence Amphora 2016, made from chenin, with a little viognier, in imported Italian amphoras.

(Actually, if you want to get really pedantic about things like “amphorae”, you can note that amphora is the wrong word to use, as that kind of pot was used by the Romans only for transport and storage; but “clay pot” doesn’t perhaps sound grand enough. Note, however, that the Laibach Claypot Merlot – if that springs to mind – is matured in oak….)

There still are very few wines made here entirely in clay pots. In 2016 Charla Haasbroek, winemaker at Sijnn, also made a tiny quantity of chenin  in amphora under her own label. The yet-to be released Reyneke Natural Chenin Blanc is also from that vintage – it’s a quite astounding wine. Noticeably, chenin looms large in all three of the 2016s mentioned, and the grape indeed seems to have a real affinity for the clay. These wines (all naturally fermented) have great clarity and purity, and a minerality that actually has a stony quality to it. I love them all.

If those are, I think, the only pure-clay-matured local wines, there are increasing numbers with a clay-matured component. Sadie Palladius, for example, since 2016 makes no use of oak barrels: half the wine comes from local clay pots, the other half from concrete “eggs”. More and more producers have brought amphoras into their cellars. A few years back, the Platter Guide mentioned only a couple; the current 2018 edition specifically instances at least a dozen, and I’d bet something handsome that the next edition will have many more.

In brief, on the basis of the amphora wines I’ve tasted, I am convinced that maturation in clay is A Good Thing. Very. It’s a hugely important contributor to finesse and to much more than that in terms of purity and structure, however difficult it is to put that “much more” into words.

While that most ancient of winemaking countries, Georgia, is most often mentioned in connection with the continued tradition of making wine in clay, in fact there’s a significant difference between their “qvevri” and the amphoras that are most commonly used now. That is, Georgian qvevri are buried in the soil, while the Roman and Mediterranean practice is free-standing pots aboveground. The increasingly fashionable use of clay pots for winemaking (which began a few decades back in a small way in Italy) is largely in the Mediterranean tradition – although many lessons are also being learnt from Georgia. 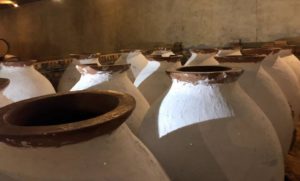 Georgian qvevri imported by Avondale for burying in Paarl soil.

So I was most intrigued to learn recently that Avondale in Paarl (which has been experimenting with clay pots for some years now, as part of their dedicatedly natural approach to winemaking) has acquired 24 genuine qvevri from Georgia. That’s them in the photograph and you can see the traditional outside coating of lime (the insides are coated with beeswax to control porosity). The qvevri have now been buried in Avondale’s barrel cellar, in home-farm soil.

This is all fantastic and fascinating pioneering work. As soon as I found out about it, I contacted manager Johnathan Grieve, of the family which owns the farm, and invited myself out there. Now that a difficult vintage is over, and the team are, I trust, recovering, I hope it won’t be too long before I carry out that visit. And I’ll report back on this brave and exciting, and locally unique, experiment.