Marc Kent, Boekenhoutskloof cellarmaster for over 25 years and its effective director for many of those (and a major shareholder in the brand), no longer concerns himself with “dragging pipes around and doing pumpovers”. He has the luxury of an excellent team in the cellar – headed by the eminent Gottfried Mocke for some five years now – but not a wine ever leaves the property without his involvement and his signing it off, including wines for The Wolftrap and Porcupine Ridge. The late Tim Rands, the founder of wine company Vinimark and the man behind the founding of Boekenhoutskloof, once told me what he most valued in Marc: his vision, and his skill in blending. Both of those, Tim knew, have been central to Boekenhoutskloof’s remarkable critical and financial success.

Marc’s full involvement in the crucial blending decisions has been rather more difficult over the past year than usual. He’s spent much of the pandemic period in Europe, based in Amsterdam for various reasons, and has found himself unable to get back for the frequent and regular periods he had expected. (He did manage to get out here for a time in December to work on the blends of the 2019 syrahs and cabernets, before restrictions tightened again; and he will be out again this week, via a necessarily rather circuitous air-route, as the harvest starts.) 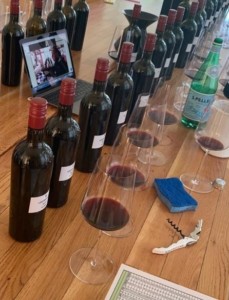 The solution to this has been a constant flow of samples, prepared by the teams at the Franschhoek and Helderberg wineries and couriered to Marc’s flat in Amsterdam. Tasting barrel and tank samples of infant Cape wines with a middle-distance view though the window of the Rijksmuseum must have a certain piquancy. Or, as Marc says: “It’s been amazing for me!”

There was, for example, the task of blending 1.3 million litres of sauvignon blanc. But the most complex and important bit of international blending effort was for the 2019 Chocolate Block, the one that’s now on the shelves (including those behind-bars local ones). By now, of course, the blenders have a good idea of what’s to be expected from the various vineyard components for the final blend of Swartland wines (it’s always syrah-based, with grenache, cinsault, cab sauvignon and a splash of viognier) – with every year a greater contribution from the substantial Boekenhoutskloof-owned vineyards of Porseleinberg and Goldmine (“maybe 40% in 2019”, says Marc).

So the home team assembled some 40 samples representing different vineyard blocks and varieties, carefully bottled them, and packed a half of them off to Amsterdam with all the details and annotations. Marc made space and did his own assembling – of enough glasses (you can’t expect him to taste from ordinary glasses, for heaven’s sake!). Fortunately, he’s a friend of the local agent for Zalto and was able to get a good deal on what he needed, he says. Then, last June, it was a question of getting together on Zoom with the whole team: Gottfried Mocke and the other winemakers – Johann Niesenbeeren, Heinrich Hugo and Eben Meiring – and Callie Louw who works with the vines at Porseleinberg and Goldmine.

And so to work: sniffing, swirling and sampling; discussing, accepting and rejecting….

The result was, as the final Chocolate Block label announces, a wine assembled from a total of 2 414 barriques. That’s a lot of wine – almost unequalled in South Africa in its ratio of quality:price:quantity. 2 414 multiplied by 225 litres (the content of a bordelaise barrique), retailing for R235 per bottle from Cybercellar (R259 from Caroline’s) and a helluva lot more elsewhere in the world. Jaw-droppingly enviable statistics. In fact, of course, that is really a notional (actually an equivalent) number of actual barriques: much of the wine was matured in larger barrels and casks – from 600 to 2 500 litres (only the cab was treated to new barriques). But the label has always shown the volume according to the barriques that were originally used for all the wine, so that traditional measure continues.

As to the wine. I tasted it at Boekenhoutskloof, fairly soon after it was blended. Writing this, I blithely intended to go and get another bottle to see how it was progressing. But, of course I couldn’t. And then couldn’t even find the notes I’d made last year, so I can just mention some of what I recall. As to be expected from a fine vintage in the Swartland, Chocolate Block 2019 is at least up to its usual standard. It’s a fairly big wine as always, with ripe fruit darkened and given further grip by the cab, the syrah gaining further freshness, bright lightness and perfume from cinsaut and grenache. Serious wine, but already fairly approachable and very enjoyable. It was good to think of considerable input to the final blend having being made from 10 000 kilometres away!

The 2019 vintage of Boekenhoutskloof Syrah involved one of the earliest pickings to date. The Swartland vineyards were exposed to extremely dry conditions during flowering. resulting in early set and...

Though 2018 is a generally considered a challenging vintage due to it being the third consecutive year of drought, the two versions of Cabernet Sauvignon that Boekenhoutskloof produced are remarkably...