There’s nothing that Marc Kent – effectively the MD of Boekenhoutskloof, whatever his actual title, if any – nothing he loves more than a new project. And he’s clearly relishing the most interesting one since Boekenhoutskloof made its big push into the Swartland over the past decade – first buying Porseleinberg and establishing it as a stand-alone brand as well as the source for great volumes of syrah for the home winery in Franschhoek; then buying Goldmine, the farm on the slopes of Riebeekberg.

The latest Boekenhoutskloof adventure is to be in the process of acquiring a significant land presence in the Upper Hemel-en-Aarde. With any luck that should be finalised soon – but already the 2017 maiden vintages of pinot and chardonnay under the new label are bottled, and Marc will be showing them publicly at Cape Wine next week for the first time. The name of the project is Cap Maritime, and the deeply etched and sand-blasted bottles, sealed with wax, show what appear to be the three ships of Jan van Riebeek in full sail (just the name of the variety differentiates the bottles for the two wines). Why the French name I’m not sure; nor am I entirely convinced by the move from classic paper labels – but I reckon those less conservative than me will happily accept the striking aesthetic of the latter (also French-designed, as it happens).

Right now, there aren’t any pinot or chardonnay vines on the land in question – they’re all in the mind and on the drawing board of viticulturist Rosa Kruger, who’s been engaged to design and plant the vineyards. Meanwhile, other vineyards in the same Upper Hemel-en-Aarde Valley ward have been leased and will be used until the new ones grow into sufficient maturity.

Nor is there a cellar, but Marc says they will “definitely build a winery there – sooner rather than later”. For the time being – as for the 2017 and 2018 vintages already – the grapes will be vinified at the Franschhoek winery, although there will be no brand association of Cap Maritime with the parent company: similarly to Porseleinberg, Cap Maritime will be totally independently branded and marketed. 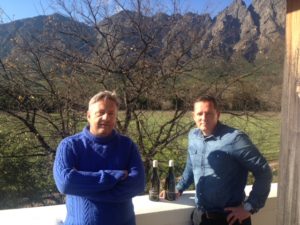 And in that Franschhoek cellar, taking in the grapes, is of course one Gottfried Mocke. He had a pretty illustrious relationship with chardonnay and pinot production when he was at Chamonix. It’s almost as though this project was dreamed up for him (and Marc Kent is nothing if not a dreamer – albeit a remarkably practical one), and it’s hard to think of it developing further without Gottfried; but I dare say we must wait and see what happens when there is a separate winery in the Hemel-en-Aarde.

As for the maiden release – I’ve had a preview and the two wines are excellent. The Pinot is typical of the Upper Hemel-en-Aarde Valley in its perfumed charm – less firmly structured by tannin than pinots from the other wards, especially the one closer to the Hermanus mouth of the valley. It has lovely pure fruit, again downplaying the savoury side. There’s real intensity and depth of flavour. No problem in predicting a reasonable future for the wine, though it’s approachable now. The Chardonnay is perhaps even finer, subtly showing all shades of citrus fruit, delicate but not without force, very refined, with a great vein of acidity and a long mineral-stony finish.

This new project is going to consolidate Boekenhoutskloof’s all-encompassing range – at the top end, of course; expanding the business’s terroir investment to now include property in Franschhoek, Swartland, Stellenbosch and the Cape South Coast. It will not do any harm, either, to the Hemel-en-Aarde, to have another well-resourced, substantial farm and winery in the area. Already, it’s the origin with the highest average bottle price in the Western Cape. And that’s not going to be dragged down by Cap Maritime. I asked Marc about the prices of the new wines. He was unhesitating: “The same as Hamilton-Russell”, he said firmly.