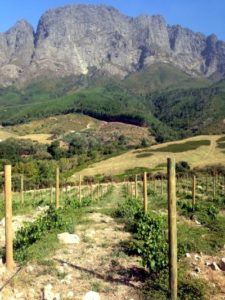 Late last year I called in at Boekenhoutskloof. On an earlier visit, the new barrel cellar had been  a huge muddy hole in the ground and an idea in the mind of the visionary who conceived it, Marc Kent. But now, half underground, half aboveground, and linked to the winery by a gently sloping subterranean passageway, it was all there. Not quite ready, however: infrastructurally yes, but awaiting a multitude of barrels and foudres to furnish it properly, and the outside still somewhat raw and unfinished. So I was strictly forbidden by Marc to publish any photos. But I can tell you it’s going to be magnificent!

No doubt the new surroundings and the systems of efficiency will add their bit to what seems a growth in the magic of Boekenhoutskloof’s reds under Gottfried Mocke, Marc’s chief winemaker since mid 2015. Gottfried obviously didn’t vinify those 2015s, but did “bring them up” and bottle them. I’ve recently been sampling them, at my leisure, and they’re a fine advertisement for the vintage and for Boekenhoutskloof.

Of the reds, much has been said about the Syrah, the first vintage to bear a WO Swartland label, coming as it now does entirely off the Boekenhoutskloof-owned properties at Porseleinberg and on the Riebeekberg slopes. There’s no doubt in my mind that the wine was improving in the few years in which it was increasingly adding Swartland grapes to the Wellington ones, and the 2015 is surely the best since the maiden 1997. It’s going to be fascinating to see what happens in more recent vintages, given the heat and drought which is likely, above all this year, to affect especially the Porseleinberg vines.

The Syrah, like all these 2015s, is terribly young still, and deserving of many years bottle maturation.

There are now two cabernet sauvignons, the well-established Franschhoek one and a more recent Stellenbosch version. It’s a testament to the fruit density of the former that it evidences less oak influence than the latter (except perhaps in its formidable tannin structure), although in fact it had more new oak in its elevage. Yet the Franschhoek is also the more refined and fresh, with a longer, drier finish. But the powerful, lithe Stellenbosch is also very good. Both seemed scarcely drinkable newly opened – though I confess that a friend called round after I’d been gingerly sipping at them, and we managed just fine to lower the levels dramatically and with great satisfaction. 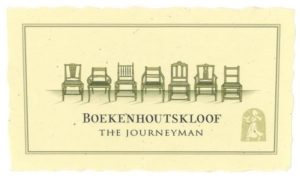 The Journeyman, off the Franschhoek estate, is perhaps the most impressive of the Bordeaux-grape reds. And it is, emphatically, in the Bordeaux tradition of cab franc (there’s also 10% merlot), rather than the lighter, fresher Loire tradition (Van Loggerenberg Breton is a rare example in this country). More specifically, the modern Bordeaux tradition: rich and ripe but even sternly structured; dense and finely textured, with tannins that are very firm but somehow succulent and generous, giving a great vinous basis for the sweet fruit. It conveys great sophistication, but isn’t over-polished. Really, it needs at least a decade in a cool quiet bottle.

It seems that Journeyman is destined to be the Boekenhoutskloof wine that’s going to be hardest to get – not only because it’s by far the most expensive (Wine Cellar in Cape Town offered this wine, the first publicly retailed, for R1500 per bottle – and it easily sold out), but also because it might well continue appearing only in best vintages. Marc Kent clearly relishes its exclusivity and rareness – though new plantings of cab franc on the estate suggest that volumes may increase. And there’s plenty of space in the new barrel cellar.