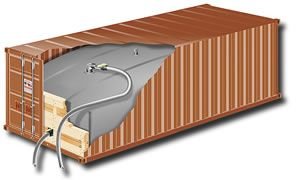 A flexitank used to ship wine in bulk,

The question of exporting wine in bulk, and packing it in bottle or box in Europe has risen again. It roused heated discussion here in 2012, after the trend towards bulk exports was becoming increasingly marked and it seemed the government was contemplating a retaliative demand that whisky should be imported here only in bulk. I don’t think anything came from that dubious idea, but the trend continues: a decade ago, some 26% of Cape wine destined for Europe travelled in large containers by ship; the figure for 2014 was, apparently, 62%.

Whether the government was concerned, as it claimed, about local job losses consequent on the move to bulk, or was being leant on by the packaging industry, I wouldn’t swear. Probably the former, but who can disentangle rhetoric from various motives? That complexity applied to the other side too: we can assume that the trend to bulk was in the interests of European supermarkets cutting costs, but the “green” arguments they could piously brandish were convincing enough. Transport pollution, for example, is clearly less when the weight of all that glass is taken out of the equation (though it is probably worse if it means Europe-bottled wines being trucked across the continent from central bottling points). More significant, perhaps, is the huge mountain of glass available for recycling in non-producing countries in northern Europe – it’s rational to use it for making bottles.

The tangle of profit motive and environmentalism will return now. What has happened is that next year the EU’s quota for duty-free imports of South African wine increases from the current 48 million to 110 million litres. However, wine is, it is claimed (though there is perhaps a little haziness here), is only exempt from duty if in packaging of two litres or less.  At present, only 84 million litres qualify, so there’s a “need” to bottle-at-source the other 26 million litres, to take advantage of the raised duty-free quotas.

At least one of the massive Cape exporters, Origin Wines, is seeing an opportunity for bigger and/or more profitable sales. Origin exports in total about 85 million litres per year, largely to EU countries.

Neville Carew, MD of Origin, is cited in a press release as saying that “the bottling drive has the backing of other big producers, as well as bottling, label, closure and other dry goods manufacturers across the packaging supply chain”. Hardly surprisingly, of course, that last group. It was an old joke (nowadays outdated, but not irrelevant) that the local wine industry is a mere adjunct of the packaging industry. And packaging costs, especially bottles, are notoriously high here, with little competition in the glass industry. Why anyone should want to help Consol Glass is an obvious question.

There are other factors. The person that big business has engaged to lead their campaign for European buyers to switch back to bottled exports, Su Birch, former CEO of Wines of South Africa, so far seems to be stressing the job-creation that could well be a consequence of moving back towards more local bottling, alongside better profits for wine exporters and the packaging industry. So we might well have a little ethical (or pseudo-ethical) tussle between green arguments and job-creation arguments. And job-loss arguments from the other side of course! Su is also marshalling all possible facts and figures to use against the inevitable environmental claims (and that will be hard, I suspect), or at least to diminish their weight.

Looking sideways, however, I suspect that if wine big-business is really concerned about job creation, and wants to present this as a reason to move from bulk- to bottle-exports, it could also usefully question the increased mechanisation its suppliers seem to be pursuing.

Wines of South Africa, the not-for-profit industry organisation which promotes the exports of all South African wine, has announced the appointment of a new CEO. She is global marketing specialist...