“Excuse me, what is a ‘Mediterranean White Blend’?” piped up an Australian voice at blind tasting of Cape Winemakers Guild last week? Good question – as so many of David Clarke’s are. He was referring to one of the category headings which, together with vintage, was all the information we were given to proceed with.

The answer was that it referred to that by now well-established group of wines mostly but by no means all from the Swartland, mostly but not all based on chenin and including just about anything else from semillon to chardonnay to viognier (but seldom sauvignon blanc). They are distinguished, as at this tasting, from those generally referred to as “Bordeaux-style white blends”, or just “Bordeaux whites”.

“We didn’t know what else to call them…” said Miles Mossop, a bit apologetically, for the CWG committee.

Well, no-one really knows what to call them, but it’s about time we decided on something (something better than this, too), given that it’s grown into such a significant category of modern Cape wine since it was “invented” by Eden Sadie. Sadie’s Palladius 2002 was, to my knowledge, the first such blend made ambitiously (as opposed to being the dregs of various co-op tanks assembled for some “dry white”).

In 2007, I wrote an enthusiastic article for the London journal World of Fine Wine on the great significance of the Cape’s white blends (I proudly think it was the first internationally published article on the topic – there have been quite a few since; and in fact the same journal is right now organising a tasting of both styles, chaired by Andrew Jefford). Anyway, I said there, after mentioning the sauvignon-semillon blends, that the other style “also has European inspiration, in the grapes and the blends of the Rhône valley, but speaking of the Cape’s ‘Rhône-style blends’ (or of ‘Mediterranean blends’ as is occasionally done) ignores the fact that, although the varietal partners of this genre are exuberantly (and experimentally) diverse, a frequently crucial part of its character is Chenin Blanc…. For convenience, and to acknowledge the essentially autochthonous nature of the development, we might now speak simply of a Cape white blend, while acknowledging that there is no essence to it.” 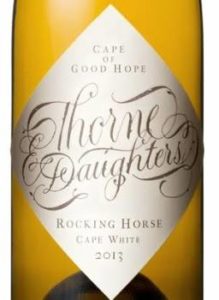 Labelling these blends with either “Mediterranean” or “Rhône” is nonsensical, even if we unfortunately feel obliged to make some cultural-cringe reference to Europe, given that chenin blanc, so important for the local assemblage, has its French HQ in the northerly Loire. Quite beside the fact that this is a blend with local characteristics and origin.
There are now at least a few local white wines of this kind whose labels proclaim them as “Cape Whites” or “Cape White Blends”. Thorne and Daughters Rocking Horse is one of the more recent. Why not? Rock on. It certainly makes sense to me, and, I’d guess, to a lot of other lovers of the category.

Or, perhaps even more to the point, we could refer to a “Swartland-style White Blend”, even if the wine is from Stellenbosch. (If SAWIS would allow that…). If the world can and does understand “Bordeaux blend” and unresentfully uses it because Bordeaux is the wine region that “invented” those styles of red and white blends, well, then, why not do the equivalent for this potent local invention? I actually think the rest of the world (well the tiny bit that cares about such stuff) would understand very well what is conveyed by the phrase. And it would be rather nice to have a wine made in California or the Languedoc explaining its style via a label saying “Swartland White Blend”.

But, whatever, let’s do something about it, urgently – and something that refers to the Cape’s own terroir and (old and emerging) traditions, rather than those of Europe.