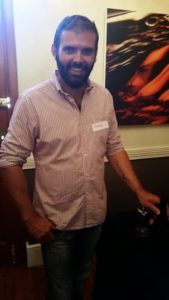 A first peek at the 2014 vintage of the Cape white blend that is Thorne & Daughters Rocking Horse. A blend of 35% Chenin Blanc (Bottelary and Swartland), 28% Roussanne (Voor Paardeberg), 22% Semillon (Franschhoek), 14% Chardonnay and 1% Viognier (both Overberg), it was matured in old oak for some 10 months.

The nose is extraordinarily complex – lime, peach, red apple, dried herbs, some pleasant oxidative character and even liquorice! Fantastic fruit concentration – really succulent – and lip-smacking acidity before a wonderfully long finish – dry, pithy, even bitter (it takes courage to leave that kind of detail in rather than polish out). Rendered with care and imagination and I believe a small step up on the 2013, which itself was a knock-out wine. To be released in May.

New to the Thorn & Daughters portfolio is a single-variety Chardonnay from the same 35-year-old vineyard that supplies grapes for Rocking Horse.

Citrus, blossom, spice but also more oxidative notes of oatmeal biscuit and a little nuttiness. Broad with relatively soft acidity (the wine underwent full malolactic fermentation) before a nicely dry finish.  Idiosyncratic but engaging. To be released in May.

New Wave but not wilfully obscure, wines of refinement rather than weight and true to the Cape. That sums up the Thorne & Daughters portfolio from John Seccombe and the...