An interesting question was asked by a knowledgeable commentator in response to some recent notes and scores about older wines by Christian Eedes: “Is it fair to deduce that you just don’t particularly like old wine in general?” It fitted nicely into two minor preoccupations of mine around now. The first had little to do with regard to the specificities of the question (to which Christian gave a good, thoughtful response). 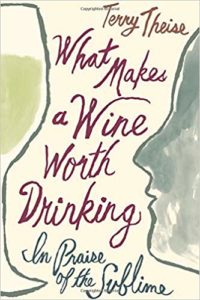 I’ve been reading a most rewarding little book by the American importer Terry Theise, called What makes a wine with drinking: In praise of the sublime (it’s available on Loot for R328 and well worth the price of a good bottle of wine). I will no doubt be saying more about the book at some stage, but what chimed with the current question is where he discusses notions of objectivity and subjectivity. Theise considers wine to be an “aesthetic object” and therefore “inimical to objectivity”. Which doesn’t, of course, flabbily mean that it’s all just a matter of “I like it, therefore, it’s good”. And, says Theise, it “doesn’t mean we can’t be objective at all, just that we need to recognize the ineluctable line between that and our inevitable subjectivities”.

I won’t pursue his interesting discussion but want to note the consequences Theise draws for wine reviewers. What is necessary, he says, and the first obligation for any critic, “is for writers to come clean about their subjectivities”, rather than “affect some spurious objectivity”. What they need to do is, firstly and crucially, know and understand their own palates, then explain their palates to their readers, clarifying what they’re “warm and cold to and not make you have to guess”.

Incidentally, Theise rejects the “fatuous” idea of blind tasting as a panacea for what many regard as the “problem” of subjectivity, because (as surely we all know by now) it “results in a ton of mistakes, often laughable mistakes”. And, in response to the idea that the sighted taster might come with expectations which unduly influence his or her opinion, he makes a point which I’ve seldom seen explicitly expressed, though I have long believed it to be true: “Really? Then I’d say those tasters have no business anywhere in print because they are insufficiently professional.”

So really, for Theise, a website like this shouldn’t just list the sort of backgrounds that it does about its contributors – at least it should also give some idea about the approach to wine taken by Christian Eedes, or Greg Sherwood or Michael Fridjhon or me, indicating preferences and tolerances (for or against old wine, for instance!).

Knowing a critic’s tastes is of great value, because as a reader you can tell the areas where you agree and disagree and therefore how valuable the critic’s judgements are likely to be for yourself. So, for example, with the famous/notorious Robert Parker, there are people, myself included, who far more value his opinions about the wines of the Rhône, especially the southern Rhône, than those about, say, Burgundy. And I reckon that regular readers of this website will recognise, for example, that Christian is more likely to give a high score to a hipster syrah (alcohol under 12%, wholebunch-pressed, no new oak in sight, etc) than to a more vinous, perhaps more classic style. While my preferences would incline more in the other direction, and I generally don’t care for extremely light wines other than Kabinett riesling. (See my recent note on Radford Dale’s Thirst Gamay, for example, which Christian found “properly smashable”; he also rated highly the Radford Dale Nudity Syrah No 16, which I thought really extreme, and too raw, edgy and ungenerous for me). And a regular would recognise that I am quite tolerant of brett, for example, sensitive to and intolerant of rich sweetness in red wines, and unwelcoming of obvious oakiness. Etc. Readers should note patterns of preference and distaste like this. If you know whether you share Christian’s tastes in syrah or mine, you’d know whose opinion in any one case would be more useful.

Ah well, we genuinely do all try our best to be professional and honest. And I do think my nearly 20 years of Platter tasting has helped me with that, as one has to try very hard there to be fair (and, yes, objective) in making judgements across a broad range of style. Even if it is noted who is the taster, one can’t allow one’s subjectivities too much licence. There are, for example, some very ripe, big, intense and oaky wines that I have rewarded highly for Platter, because I think them fine examples of a recognised style, although I wouldn’t dream of drinking them myself. As Theise suggests, to offer oneself as a critic, one must be as professional as possible.

As usual, I have got a bit carried away here. I said earlier that the comment to Christian’s piece about old wines had recalled two preoccupations of mine. The second is: How much do I actually like old wine? And, of course, how do we define “old”? Matter for some other time.