Tim James: Cooperation in the wine industry, for good and ill

I was recently privileged to be a guest at one of the amazing tastings that the Cape Winemakers Guild members regularly put on for each other – in this case the stupendously well-informed and well-prepared Andrea Mulllineux’s flights of Brunello di Montalcino (finishing with four Biond-Santis, 2011 back to 1964). The wines were brilliant, but I was also struck by the sense of camaraderie and wine-excitement now that CWG membership is growing palpably younger and less fixed in the Stellenbosch heartland (there were some candidate members attending who made these shifts even more noticeable). Amongst most of the members, I should say – a couple didn’t seem to pay much attention to the wines or anyone beyond their comfortable coterie.

This is a remarkably good thing, in an industry not much characterised by groupings of quality-minded producers cooperating in order to advance their understanding of the dynamic international world of wine and to, thus, advance Cape wine. It’s what the Cape Independent Winemakers Guild was set up for, of course – “to contribute to the advancement of the quality of Cape wines by mutually developing the knowledge, capabilities and horizons of the members”. That was in the early 1980s, as many estates especially were seeking a way forward, while the world was closing in on South Africa. The Guild later arguably lost its way for a while (and also the “Independent” label, more legitimately), becoming more concerned with the income from its annual Auction, and its boys-club nature (the quality of a few members was  perhaps doubtful, and a more radical younger generation was for some time discouraged).

Things are changing for the CWG under new leadership and with a new energy, and that can only be an excellent development, one even with wider implications than just the CWG itself.

Cooperation has, in fact, long been a central feature of the South African wine industry – but it has not always helped to generate quality. We need only remember what the K in KWV stood for [Koöperatieve Wijnbouwers Vereniging meaning “Co-operative Winemakers Union” – for those readers new to the SA wine scene]. Cooperation in the 20th century was a means to survival for farmers who were mostly poor and undercapitalised, mostly producing dreck, in a country that was itself not rich and not able (let alone willing) to absorb the industry’s persistent over-production of poor wine. 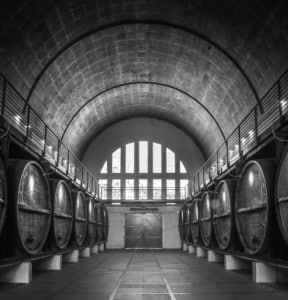 Early in the century, when the industry was suffering hugely (the aftermath of the Anglo-Boer war, phylloxera, and racial prohibition exacerbated the result of the poor quality of local wine and brandy) the government pushed for co-ops. From 1906, nine were founded with its support; only five survived. Little more than a decade later the KWV started emerging and soon thereafter started nudging its way towards quasi-statal power. Even though the whole thrust of the KWV’s guarantee of a minimum price supported quantity rather than quality, the need for local as well as industry-wide cooperation persisted. It grew more urgent as capital became necessary to meet even the KWV’s modest demands in distinguishing between distilling wine and better-priced “good wine” (i.e. supposedly drinkable stuff). Crucially, by the 1950s and 1960s, the need for the cold-fermentation systems to make the newly popular fruity white wine demanded investment far beyond the individual means of most farmers.

During the Second World War the number of wine co-operatives grew from 6 to 19. They proliferated, and by 1955 there were 46. Two further decades saw the number rise to 69. Co-ops, feeding the big merchants and the KWV, utterly dominated production, to an extent matched nowhere else in the world, as far as I know. The decline of the KWV in the 1990s, and especially the abandonment of a guaranteed minimum price, threw the co-ops to the market wolves, and financial pressures required them to transform into viable businesses, to “marketise”, where possible.

So, that sort of co-operation has left the South African industry where it is now, with the producer-owned cellars overwhelmingly dominant, and largely producing cheap, cynical wine for the local sweetish-wine market and the lower shelves of Europe’s supermarkets – with some happy islands of higher quality.

This century, a different type of co-operation has become vital, a crucial component of the Cape wine revolution. Young producers (some now not quite so young!), in the excitement of what they were discovering in the Cape’s terroirs, tended to regard each other as colleagues rather than competitors, learning from each other – much as the founders of the CWG strove to do. They help each other, lending equipment, overseeing grape-picking, occasionally even sharing grapes, etc. (Though I fear I also hear more negative stories nowadays – about competition for vineyards, about leaving necessary work for others to do; I trust this is a smaller part of the truth). Sharing cellar space (as at Gabriëlskloof and Zorgvliet) and marketing (Zoo Cru perhaps the best known) is common and seems to be an unequivocally positive experience for all concerned.

What’s more, this co-operation most often seems to be fun. The New Wave South Africa tasting in London this last week seems to have been another remarkable success (Jancis Robinson, for example, described “a massive buzz there as well as a massive crowd”). It wouldn’t and couldn’t have been thus if it weren’t for the solidarity and co-operation of the winemakers, on a high because of what they’re building together.