Tim James: Disgust – does it make wine better than sex?

You remember the scene in Sideways, where Miles gets drunk in a winery tasting room, grabs the public spittoon and pours the contents over his open-mouthed self? If you don’t, you can’t have seen the film, and you should. Undoubtedly disgusting – swallowing other people’s spitty swill – but how much more keen would you be to drink from your very own spittoon? Even though all it contains is some of that lovely wine you spat out together with some of the saliva that you’d been unthinkingly content to host in your mouth. Once we’ve passed early childhood and its socialisation process, we tend to think very differently (in most circumstances) about our bodily products once they pass the threshold of our own skin. 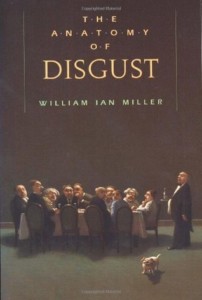 There’s no mention of spittoons in a fascinating and occasionally disgusting book called The Anatomy of Disgust, by William Miller (Harvard University Press, 1988) – the account of St Catherine of Siena draining and drinking pus is a notable example. But there are some rather nice points about the particular pleasures of wine when Miller deals with the idea of surfeit as disgust. He quotes Freud comparing wine and women (from the heterosexual male point of view, of course), though there’s nothing about song. For the good Sigmund, satisfaction with the same sexual object can’t be sustained because a man’s real love object is barred by taboos against incest, prompting him to rapid boredom and continued search. By contrast, Freud asks: “Has one ever heard of a drinker being forced constantly to change his wine because he soon gets tired of always drinking the same? On the contrary, habit binds a man more and more to the particular kind of wine he drinks.”

No doubt there’s much to be said on this topic, and I’m not going to give a full account of Miller’s dissatisfaction with Freud’s position. But I did wonder about this idea that we wine lovers don’t look for variety in wine at least as much as in … anything else. Freud was writing at a time when there was fairly limited variety of wine available to even a well-off metropolitan gent like himself (champagne, bordeaux, burgundy, sherry and port forming the bulk of it), but surely that range would have been explored to some extent, even if one’s “house wine” was always bordeaux, for example. Certainly nowadays, with good wine produced around the world, and the market ensuring plenty of competition, the idea of sticking unfailingly to a diet of, say, sauvignon blanc or merlot would be most unattractive.

I’m not going into Miller’s argument, but he does please me with some near-lyrical accounts of wine’s joys vis-à-vis those of sex. We’ve surely all heard someone say (perhaps it was ourselves) that some splendid wine, if not all wine, “is better than sex” (there’s even at least one wine named accordingly). Miller gives some general grounds for the position – though love complicates it – and suggests that: “Unless love intervenes the mere sensual pleasures of sex tend to cloy in a way that wine does not. And it seems to make no difference whether the sex is all with one unloved person or with many unloved persons.”

There are other differences, says Miller, and a crucial one is orgasm – but this doesn’t, as you might at first suspect, hand the victory to sex, although “wine has nothing quite comparable” (yes, we wine cognoscenti have noticed that). For, he suggests, “orgasm is by definition excessive”, and sexual satisfaction involves “indulgence becom(ing) indistinguishable from surfeit and overindulgence”. The “pleasure curve” of sex has an “abrupt decay rate”; there is a “disgust that comes with the surfeit that is orgasm which leaves one … panicked, empty, disgusted with one’s own having desired”.

Wow. Wine, though, has a less rapid letdown, and offers more “gently sloping moderate pleasures”.  “Wine can be indulged in pleasurably without engaging disgust and only holds the threat of the disgust if we overimbibe; sex, in contrast, must deal with disgust on the trip up and on the trip back down as a necessary aspect of its orgasmic pleasure”.

Not only a less rapid letdown, let me turn from the book to add. A less rapid upslope too. It’s difficult to define, and therefore to measure, the average bout of sex, but a study that appears often in a Google search reports an average of 5.4 minutes and a range from 33 seconds to 44 minutes. I’d guess that most of us have occasionally finished a two-shared bottle in 44 minutes – but never 33 seconds. And have usually been immediately ready for a second, let it be noted….

Ah well. William Miller’s studies continue. He’s also written a book, which I am now reading, called Faking It, about pretence, bluff, and the like. That should have quite a bit of relevance to the world of wine appreciation, notably to wine journalism, I reckon.