Harvest 2016 proceeds. That is, for some it is happening right now, for others it is yet to come and for many all the grapes are in, and the wine – pitifully little of it in some cases – is in barrel or tank. And occasionally even in bottle: believe it or not, while some sauvignon grapes are still on the vine in the Cape’s coolest spots, Klawer announced last week that their Sauvignon Blanc 2016 has been released. 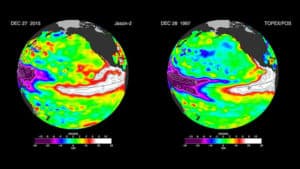 Deeply worrying though the 2016 harvest has been for dryland grape-growers and winemakers (especially, but not only, in the Swartland), the harvest that worried farmers and producers are now most concerned with is probably next year’s. OK, this year was ghastly in many areas (it seems anything from moderate to very good in others), and it’s going to have significant economic consequences for many – but one bad vintage doesn’t make for a real disaster. But two – or even three – such years in a row, which I’ve heard is a real possibility? We are suffering from what has been described as the most powerful El Niño effect in a century. Last year Professor Francois Engelbrecht of the CSIR showed that 2015 was perhaps the hottest year ever recorded in Africa – with both climate change and El Niño playing their parts.

It’s not just the danger of another dry winter and hot summer, as viticulturist Rosa Kruger explained to me. Those exhausted vines still out there in the heat need post-harvest water even before winter, to help them build up reserves. If there’s no rash of new little rootlets to pick up nutrients, fertilising will be useless. Some old vines will die – ask Chris Alheit how his beloved Radio Lazarus vines in Stelenbosch are bearing up. At best, without rain by May this year at the latest, next year’s crops in most regions will inevitably be smaller than usual, whatever winter and summer bring.

Furthermore, it’s not just unirrigated vineyards whose water tables need to be replenished. Even if a winegrower has escaped this year thanks to irrigation, what now? Many dams have run dry coping with the drought and heat of the past growing cycle; maybe there can be no post-harvest watering of the vines; furthermore, if the dams are not filled, what will happen if next summer is like this one has been? It’s great having irrigation systems on your grand Stellenbosch farm, but those dripping pipes responding via computer to cleverly monitored needs are irrelevant if your dams are, simply and emphatically, empty. If you’re in Robertson or Rawsonville, dependent on the generosity of river and dams to succour your vines, what if the river fails? Again, it’s great having water rights (even if water becomes more expensive) – but what if there’s simply no water to be had?

Sorry if my depressed Sunday evening thoughts are depressing you on Monday morning – but we winelovers need to know the reality of the threat to the industry. Perhaps it won’t happen, and plentiful rains and a cold winter will come…. If you believe that prayer might help (something in its ineffable wisdom inflicted El Niño on the world but might be persuaded to change its mind if you ask nicely?) better start, please. I think of the anguished words of Gerard Manley Hopkins, and apply them to a weary, heat and drought-battered vine: “Mine, O thou lord of life, send my roots rain.”

Otherwise, join the rest of us in gloomy hope, and hold thumbs for the farmers, the whole thirsty communities, scanning the implacable blue for that promising cloud no bigger than a man’s hand.